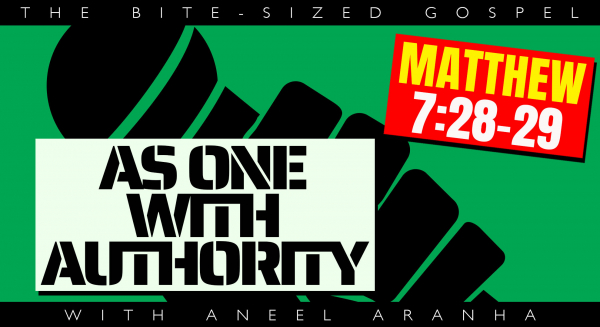 When Jesus had finished saying these things, the crowds were amazed at his teaching, because he taught as one who had authority, and not as their teachers of the law.

Jesus' lengthy discourse — from Matthew 5 until this point today in Matthew 7 — has become known as the Sermon on the Mount. Jesus' listeners were in complete awe, not because everything they had just heard reversed all they had held to be true, but because it was delivered by somebody who "taught as one who had authority."

Teaching *as one who has authority* is different from teaching *with authority.* Unlike other preachers who spoke with loud, belligerent voices to show their authority, Jesus spoke with a spiritual authority that reflected who he was, and his listeners knew that here was someone who knew what he was talking about.

And the things Jesus said shook up a religious system mired in man-made rules and regulations. Jewish leaders, who were proponents of the system, found themselves threatened by his preaching. "By what authority are you doing these things?" they asked. "And who gave you this authority?" (Matthew 21:23). Jesus didn't waste his breath answering.

We are in as much danger today as the people were in Jesus' time of being buried in man-made teachings delivered by man-made ministers that do nothing to touch the souls of people. We can recognize these people by what they teach. They make no mention of Christ in what they proclaim or of the message of the cross that is the power of God to all who believe (1 Corinthians 1:18).

A story I heard recently will illustrate this. In the times when kings ruled the lands, a bishop had a talented young man preach to the king. After the young man was done preaching, the Bishop asked the king what he thought. In his blunt manner, the king replied, "It might have been a good sermon, for all I know; but I consider no sermon good that has nothing of Christ in it!"

Consequently, the preaching bears no fruit. As Jesus said, "Flesh gives birth to flesh, but the Spirit gives birth to spirit. You should not be surprised at my saying, 'You must be born again.'" (John 3:6-7). If our teaching is to be effective, leading people to be born again, it has to be led by the Holy Spirit in his mighty power. This will draw people to Christ as effectively as it did 2,000 years ago; anything else will fail.