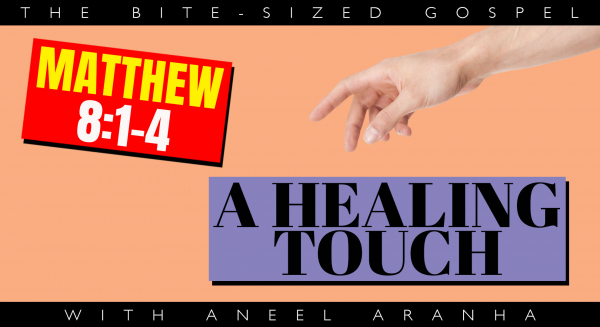 When Jesus came down from the mountainside, large crowds followed him. A man with leprosy came and knelt before him and said, “Lord, if you are willing, you can make me clean.” Jesus reached out his hand and touched the man. “I am willing,” he said. “Be clean!” Immediately he was cleansed of his leprosy. Then Jesus said to him, “See that you don’t tell anyone. But go, show yourself to the priest and offer the gift Moses commanded, as a testimony to them.”

Leprosy in Jesus’ time was an incurable disease, and lepers were ostracized by the community. Luke’s description of this leper suggests he was in an advanced stage of the disease. Consequently, he was facing imminent death. He hears about Jesus and the miracles he is performing and wonders if Jesus might be able to heal him too. The only lepers he had ever heard of being healed were a guy called Naaman (see 2 Kings 5) and Moses’ sister, Miriam (see Numbers 2:1-16). But who knows? He might be the third.

So, he goes to Jesus. Now, remember, by law, he is not allowed to come closer than six feet to anyone. We didn’t invent social distancing. There was a chance the crowd would beat him up savagely if he broke that law, but his desire to be healed overcame his fear, and he rushed at Jesus. Before anybody could stop him, he threw himself at Jesus’ feet and begged him, “Lord, if you are willing, heal me!” The crowd would have instantly recoiled, but then they recoiled even more at what Jesus did. Do you know what he did? He reached out and *touched* the leper, while the leper still had leprosy!

We often miss this point, but there is a tremendous lesson here for all of us. There is a longing in every human being for physical intimacy. Newborn babies struggle to gain weight and grow without the human touch. But infants who experience a lot of contact are happier. Their body temperatures regulates almost constantly, and their immune system becomes strong. In recent times, we have become a people fearful of physical contact. This has much to do with being physically violated, but lately, because of Covid-19, we have stopped physical contact altogether. Many people became depressed and suicidal as a result.

So, what can we do? Well, if you don’t have anybody to hug, hug Jesus. “How?” you ask. “I can’t see him.” Well, God has given us an imagination for a reason, and we can use it to embrace him. Before you say you can’t do this, can I remind you of those times you thought about embracing the person you loved? If we can do it with them, we can do it with Jesus, no? And in this embrace, we will find healing, not just for our bodies but also for our broken hearts, our troubled minds, and our wounded spirits.