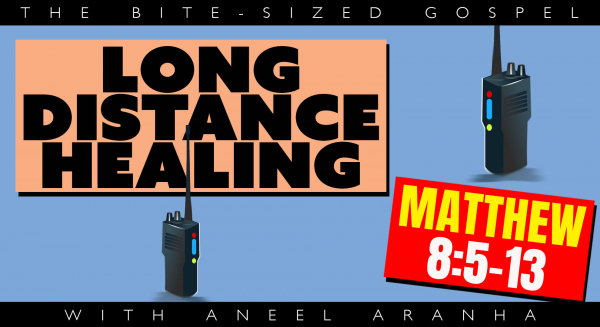 When Jesus had entered Capernaum, a centurion came to him, asking for help. “Lord,” he said, “my servant lies at home paralyzed, suffering terribly.” Jesus said to him, “Shall I come and heal him?” The centurion replied, “Lord, I do not deserve to have you come under my roof. But just say the word, and my servant will be healed. For I myself am a man under authority, with soldiers under me. I tell this one, ‘Go,’ and he goes; and that one, ‘Come,’ and he comes. I say to my servant, ‘Do this,’ and he does it.” When Jesus heard this, he was amazed and said to those following him, “Truly I tell you, I have not found anyone in Israel with such great faith. I say to you that many will come from the east and the west, and will take their places at the feast with Abraham, Isaac and Jacob in the kingdom of heaven. But the subjects of the kingdom will be thrown outside, into the darkness, where there will be weeping and gnashing of teeth.” Then Jesus said to the centurion, “Go! Let it be done just as you believed it would.” And his servant was healed at that moment.

After healing a leper, Jesus enters Capernaum, a fishing village located on the northern shore of the Sea of Galilee. When he was there, a centurion approached him. A centurion was a professional officer in the Roman army who commanded a hundred men (a century), of who 80 were legionnaires and the other twenty orderlies.

He has a servant at home who has become paralyzed and in great suffering - this describes a stroke - and he goes to Jesus desperate for help. “Lord, my servant is lying at home paralyzed, in terrible distress,” he says. Before he can say another word, Jesus says, “I will come and cure him.” I have always believed this indicates Jesus’ willingness - nay, eagerness - to heal us of our suffering.

Now pay attention to what the Centurion says. One: he says, Lord, I am not worthy to have you come under my roof. This indicates an acknowledgment of his sinfulness. Scripture declares: “If we confess our sins, he is faithful and just and will forgive us our sins and purify us from all unrighteousness” (1 John 1:9).

Two, he says, “Only speak the word and my servant will be healed.” Scripture teaches: “Without faith it is impossible to please God, because anyone who comes to him must believe that he exists and that he rewards those who earnestly seek him” (Hebrews 11:6). It also teaches: “Therefore I tell you, whatever you ask for in prayer, believe that you have received it, and it will be yours” (Mark 11:24).

And three, the Centurion says (this time, I paraphrase), “I am a man with authority, I have soldiers under me who do as I say. I recognize that you are a person with even greater authority.” Jesus would later declare what the Centurion knew, “All authority in heaven and on earth has been given to me” (Matthew 28:18).

So, are we like the Centurion when we approach Jesus? With repentant hearts, with faith in his goodness, and with confidence that he has the authority to do all things? If we do, let us expect miracles.