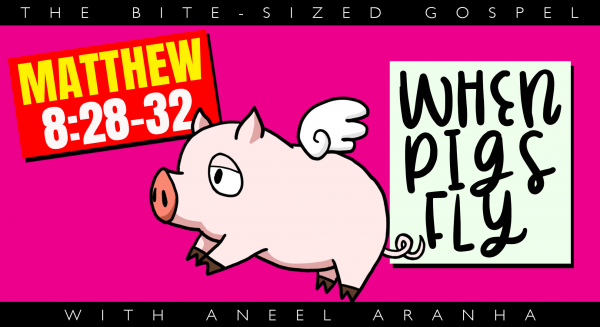 When (Jesus) arrived at the other side in the region of the Gadarenes, two demon-possessed men coming from the tombs met him. They were so violent that no one could pass that way. “What do you want with us, Son of God?” they shouted. “Have you come here to torture us before the appointed time?” Some distance from them a large herd of pigs was feeding. The demons begged Jesus, “If you drive us out, send us into the herd of pigs.” He said to them, “Go!” So they came out and went into the pigs, and the whole herd rushed down the steep bank into the lake and died in the water. Those tending the pigs ran off, went into the town and reported all this, including what had happened to the demon-possessed men. Then the whole town went out to meet Jesus. And when they saw him, they pleaded with him to leave their region.

Today’s story is bizarre. Not because of what happened to the pigs, although that is pretty weird too, but because of the reaction of the citizens of this town. They have just had their chief devil-in-residence evicted, but instead of being happy, they tell Jesus to get out of town. Why? Did they want the devil around? Did they get used to the two demoniacs? Did they get upset because their pigs went flying?

The more I thought about this, the more I realized that it actually might be true. They didn’t want Jesus hanging around because evil doesn’t like good in the neighborhood. And the truth of this can be seen right around us. Why do people hate Christians—and I am talking about real Christians here—those who obey the Lord, not just declare his Lordship.

Most countries have thrown God out of their institutions - from courtrooms to classrooms. So nobody should be really surprised at what is happening in courtrooms and classrooms these days, and everywhere else as well. You cannot pick up the newspaper these days without reading about some obnoxious law being put into effect. Or about some new shooting in a school.

But that’s what happens when you throw God out. You invite the devil in. And people get used to living with the devil, even with the death and destruction that he brings, because he gives us the illusion of freedom. So if *we* go, trying to get rid of the demoniacs living in a town, the townspeople are going to tell us what they told Jesus. “Leave.” We will. As Jesus did. But not before we send pigs flying.

And that’s about to start happening now.