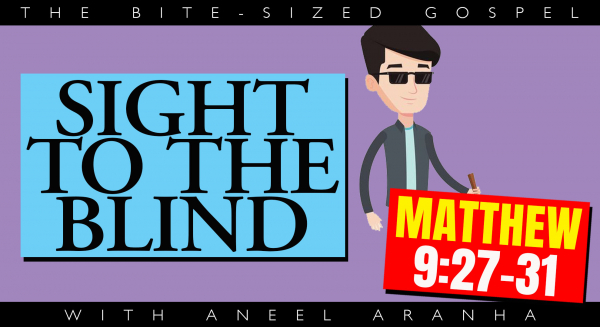 As Jesus went on from there, two blind men followed him, calling out, “Have mercy on us, Son of David!” When he had gone indoors, the blind men came to him, and he asked them, “Do you believe that I am able to do this?” “Yes, Lord,” they replied. Then he touched their eyes and said, “According to your faith let it be done to you”; and their sight was restored. Jesus warned them sternly, “See that no one knows about this.” But they went out and spread the news about him all over that region.

Today’s passage tells the story of two blind men who followed Jesus crying loudly, “Have mercy on us, Son of David!” We don’t know why Jesus ignored them until he got off the street, but when they came to him inside the house, he asked the second of his standard two questions. The first question he always asked was: “Do you want to be healed?” The second was: “Do you believe I can heal you?” Unsurprisingly, because he had just brought a dead girl back to life, they both answer, “Yes, Lord.” And he heals them.

What caused their blindness? Again, we don’t know because there are many reasons for physical blindness. It is the same when it comes to spiritual blindness too, but one of the most common reasons is the one suggested by Paul. He wrote: “The god of this age has blinded the minds of unbelievers so that they cannot see the light of the gospel that displays the glory of Christ, who is the image of God” (2 Corinthians 4:4). How does he do this?

He does this in many ways. One, he feeds us the delusion that we are self-sufficient people: that we don’t need a religious crutch, let alone a savior. Two, he gets us chasing after money, fame, and power: distractions that take us far away from Jesus. Three, he sows confusion by setting up science and reason in opposition to faith — incidentally, they are not! — making it seem as though we had to make a choice between one or the other. So, how does one gain sight, which is a euphemism for salvation?

First, we have to recognize we are blind, which is not easy, especially in a world where almost everybody is blind. This recognition usually follows a situation where one of those three things we just spoke about is challenged. Second, once we recognize we are blind, we have to make our way to the only person who can give us sight. And that, of course, is Jesus. There is salvation in no other name (see Acts 4:12). And third, we have to tell him to heal us, believing that he will.

May all of us who are blind seek Jesus and see.