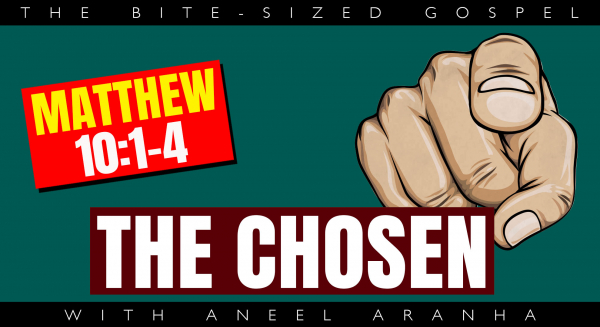 Jesus called his twelve disciples to him and gave them authority to drive out impure spirits and to heal every disease and sickness. These are the names of the twelve apostles: first, Simon (who is called Peter) and his brother Andrew; James son of Zebedee, and his brother John; Philip and Bartholomew; Thomas and Matthew the tax collector; James son of Alphaeus, and Thaddaeus; Simon the Zealot and Judas Iscariot, who betrayed him.

You may have heard the saying: “God does not choose the qualified, he qualifies the chosen.” We can see the truth of this in the twelve men that Jesus chose to be his apostles. For the most part, they were simple, possibly even illiterate people (Judas was probably the most qualified among them), yet the things that they did changed the entire world forever. How did they do this? Because Jesus qualified them to do so. And how did he do this? First: he called them. The apostles weren’t job seekers. They didn’t hunt down Jesus for the post of apostle. Jesus called them.

Next: He taught them. They had their apprenticeship under him. And what an apprenticeship it would have been. He was so radical in his thinking, it would have taken them weeks to process the stuff he spoke about, but they eventually got it. The main reason they got it was because he demonstrated everything he taught. He didn’t just teach them theory; he also gave them practical lessons so that the lessons became deeply ingrained in their minds. When the Lord of the Universe kneels before you and washes your feet, it is not a lesson you will forget!

Third: He sent them out, giving them the authority to heal the sick and cast out demons. I can’t even begin to imagine how they felt. Nervous? Excited? Apprehensive? Afraid? Possibly all of it. Then, he gave them instructions to follow as he sent them out. He told them to stick to the Jews and leave the Gentiles alone. He told them to proclaim the news that the Kingdom of heaven was near. He gave them additional instructions, but we will look at these later. They went out in obedience, returning later with great joy that they had accomplished their mission.

In the passage that preceded this, Jesus told his apostles to pray to the Lord of the Harvest to send laborers into the field. Who are the laborers? Isn’t it us? But you might say, “How do I know?” Have you heard Jesus saying: “Many are called but few are chosen” (Matthew 22:14)? How are people chosen? Let us imagine I invite a group of people to a movie. Who will I take? Only those who accept the invitation, no? Jesus is inviting all of us to be his disciples. We are all being called. But he is not going to force us to follow him. He will choose only those who say yes. These are the chosen.

The only question is: Will you be one of them?