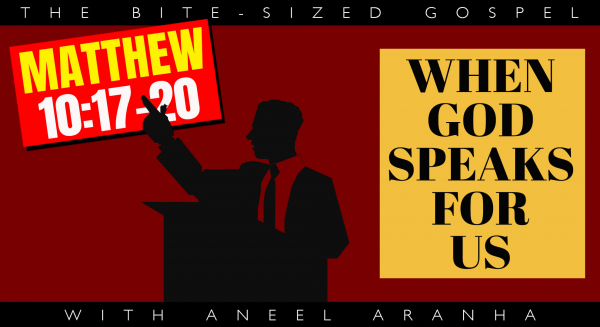 (Jesus said to his apostles:) “Be on your guard; you will be handed over to the local councils and be flogged in the synagogues. On my account you will be brought before governors and kings as witnesses to them and to the Gentiles. But when they arrest you, do not worry about what to say or how to say it. At that time you will be given what to say, for it will not be you speaking, but the Spirit of your Father speaking through you.”

I will never forget the first time I preached. It was a very short fifteen minute talk on love. I had been practicing it for weeks, waiting for the time when I’d be invited to share the word. Then one day, the leader of this multi-faith group asked me to talk at one of the meetings. After I had given the talk, I went to my little prayer room and asked Jesus what he thought of it. “Not bad,” he said, “but that was you talking. Next time let me do the talking.” It took me a few months to figure out how that worked, but once I got it, I discovered the secret to powerful preaching. It is also the secret to making a strong defense of the faith, as Jesus says today, so it’s important we know how this works.

Allowing God to do the talking doesn’t mean you just go up in front of people without any preparation and start talking, believing the Spirit is gonna talk for you. It consists of: One, being filled with the Holy Spirit. Two, being filled with the word of God. Consequently, when the occasion arises, the Holy Spirit within you will help you bring out the right and relevant words you need to say at the time. (Often, he will give you insights even as you are talking, things you have never thought of before, and I just love it when this happens. I call it the “Holy Spirit download.”)

We have several instances where we see this happening in Scripture. On the day of Pentecost, when Peter went out with the eleven and gave his first sermon, he was filled with the Holy Spirit who had just been poured out upon all of them. Then he began quoting rather obscure passages of Scripture. However, these weren’t texts that he was unfamiliar with. He had undoubtedly read them or heard them, and when he was speaking, the Spirit brought them to mind, and backed the words up with his power. The result: 3,000 people accepted Christ that day.

On another occasion, we find Stephen doing something similar. His example illustrates what Jesus said in today’s passage. I paraphrase: “When dragged before people, don’t worry about what to say, for the words will be given to you at the time by the Holy Spirit who will speak for you.” Stephen was one of the first deacons of the Church. He worked great signs and wonders, which earned him the jealousy of many people. They hauled him before the Sanhedrin on trumped-up charges. In his defense he delivered an awesome sermon.

Three thousand people didn’t accept Christ as a direct result of Stephen’s preaching. However, there was a man standing there, listening to him talk. You know who that was? That was Paul, and although Scripture doesn’t talk about the impact it had on Paul, I am convinced it primed him for the conversion that would take place a few days later. Paul went on to become the world’s greatest evangelist and I am sure that Stephen can be credited with much of what he had done. Amazing, ya?

So, this is how it works. Therefore, if you want to know what to say when you are suddenly called to preach, or if you find yourself having to make a defense of your faith, make sure you know God and know his word. And then let God speak for you.