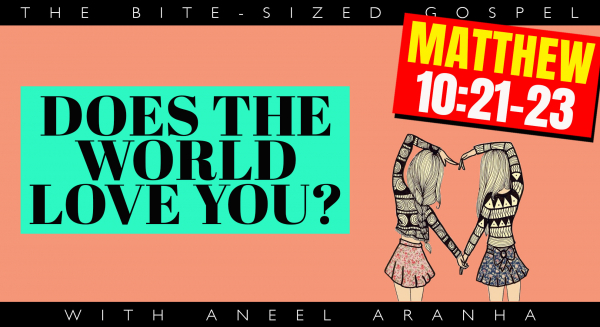 (Jesus said to his apostles:) “Brother will betray brother to death, and a father his child; children will rebel against their parents and have them put to death. You will be hated by everyone because of me, but the one who stands firm to the end will be saved. When you are persecuted in one place, flee to another. Truly I tell you, you will not finish going through the towns of Israel before the Son of Man comes.

A few years ago I was invited to give a retreat to a group of pastors in England. At the time, a lot of the laws currently in effect that offend faithful believers were not yet passed, but there were indications that they would soon be. I asked the pastors why none of them protested. The reply was that they would be put in jail if they did. I found that crazy on two levels. Whatever happened to the right of free speech that western nations boasted about? But more importantly, since when were people of God afraid of going to jail? In the early days of the church, people were willing to die to safeguard what they believed.

And then he continued: “Remember what I told you. ‘A servant is not greater than his master.’ If they persecuted me, they will persecute you also” (John 15:20). Why did Jesus warn them? Two reasons.

One, naming the fear is the first step to being freed from it. Two, and in this case it is the more important factor, there is the assurance of the reward that awaits the one who endures. Jesus says, “the one who endures to the end will be saved.” “But, I don’t want to die”, you say. I get it. It is a scary thing to look down the barrel of a gun. The threat of death is a powerful form of fear. The ability (and willingness) to kill is one of the most potent forms of power one man can exercise over another.

But Jesus says, “Do not fear those who kill the body but cannot kill the soul; rather fear him who can destroy both soul and body in hell” (Matthew 10:28). Furthermore, let me remind you of something we reflected upon a few days ago. Death should hold no fear for the Christian because the Christian lives forever.

In the early years of the Church, people understood this, and therefore didn’t fear death. In those days, accepting Jesus meant accepting death, because Christians were put to death in the hundreds of thousands, very often in cruel ways. Yet, that didn’t stop people from becoming Christians. They went to their deaths willingly. And the faith spread, fertilized by the blood of these martyrs. But now we have become a complacent, fearful lot, so afraid to open our mouths.

Let us not be afraid.