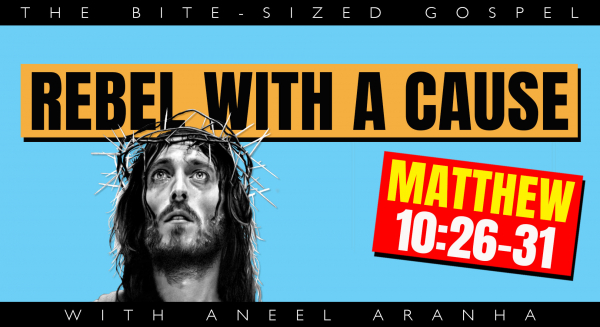 (Jesus said to his apostles:) “So do not be afraid of (those who persecute you), for there is nothing concealed that will not be disclosed, or hidden that will not be made known. What I tell you in the dark, speak in the daylight; what is whispered in your ear, proclaim from the roofs. Do not be afraid of those who kill the body but cannot kill the soul. Rather, be afraid of the One who can destroy both soul and body in hell. Are not two sparrows sold for a penny? Yet not one of them will fall to the ground outside your Father’s care. And even the very hairs of your head are all numbered. So don’t be afraid; you are worth more than many sparrows.”

I hated going to doctors or dentists when I was a kid. They'd often take this injection out and say, "This won't hurt a bit," before jabbing you with the thing. And, of course, it hurt. I wouldn't trust anything they told me after that. I think doctors are now taught to tell the truth because these days, they tell you when something they do will hurt. "This will hurt a bit," they say, "but then you'll be fine." I appreciate the honesty. You are prepared for the pain, and because the doctor is honest, you trust whatever else he tells you.

Jesus is like this. He tells his apostles precisely what they can expect, and as we saw in previous readings, none of it is pleasant. They would go out like sheep among wolves. They would be hauled before councils. They would be flogged in the temple courts. Their family members would turn against them. They would face other miscellaneous persecution. He would go on to tell them other stuff, but the bottom line was that they would suffer. So, here is the question for thought: why on earth would they stick by his side?

If Jesus told you that you would go through a lot of suffering if you followed him, would you stick by his side? This is a very serious question. You see, he IS telling us that we will go through this if we are his faithful followers. Because if we are his faithful followers, we will do what he told his disciples to do. "What I say to you in the dark, tell in the light," he said. "What you hear whispered, proclaim from the housetops." And then suffer the consequences! But, first, what did he mean by this?

"What I say to you in the dark" were the private lessons Jesus gave his disciples. They were to "tell in the light," meaning they would make these lessons public. "What you hear whispered" referred to the Jewish Rabbi's practice of standing next to a student and whispering in his ear what they wanted the student to speak aloud. But Jesus said they were not merely to speak aloud but "proclaim from the housetops," a reference to the practice of making public and private announcements from rooftops. In short, Jesus wanted them to fulfil his commission of proclaiming and teaching (see Matthew 28:18-20).

Doing this could cost them their lives. So, let us return to the question I asked. Why would the apostles still stick by his side, knowing what it would cost? The thought of suffering is never pleasant, yet they accepted the prospect. Why? Because they wanted to fulfill God's purpose for their lives. It was a noble purpose. When people enlist to join the army, they do so because defending their country matters to them. It is a noble purpose for which they are willing to lay down their lives.

The question for us is: Is the salvation of souls a cause that matters to us that we are willing to lay our lives down?