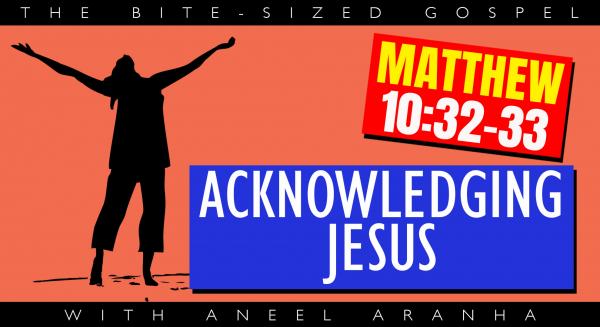 Here is a question to get us started. When was the last time you spoke about Jesus, or even mentioned his name, in a group of non-believers? And I am not talking about the times we used his name as a swear word or an exclamation mark.

Let us take heed of Jesus’ words: “Whoever acknowledges me before others, I will also acknowledge before my Father in heaven. But whoever disowns me before others, I will disown before my Father in heaven.” A little earlier, we saw how Jesus said, “Not everyone who says to me, ‘Lord, Lord,’ will enter the kingdom of heaven, but only the one who does the will of my Father who is in heaven” (Matthew 7:21). He ended with a frightening warning: “I will tell them plainly, ‘I never knew you.’” (Matthew 7:23).

Here, we have one reason why Jesus might say he never knew us. Because *we* acted like we never knew him. Part of the reason for this is fear of rejection or scorn, or even worse. But I have discovered this isn’t always the case. And this discovery started in the craziest way. A few years after my conversion, I started traveling on international missions. I got on a plane one day and took my usual seat by the window. A Muslim woman took the seat beside me. I knew she was Muslim because she had on an abaya — what some might call a burka.

As the plane took off, I heard Jesus say, “Aneel, talk to her about me.” “You gotta be kidding?” I replied. “Talk to a Muslim lady, that too somebody who seemed orthodox. No way.” A few minutes later, the woman struck up a conversation. “Are you a preacher?” she asked. It was probably the cross on my pocket that gave me away. ”Yes,” I replied, and then she began evangelizing me about her religion!

It was one of the most humbling experiences of my life, having a lady talk to me about her faith while I was afraid to talk to her about mine. I decided I would never refuse the opportunity again, and I have literally spoken to thousands of people about Jesus since then. And strangely enough, once people realize you are not out to convert them, which I am not — we are not called to convert anyone, just share our faith — listen with more than a little interest. I believe that many found their way to Jesus because of that.

As for the lady on the plane, we spoke about our respective faiths until we landed. I left what happened after that in the hands of God, as we all should, because in the end, it is up to him what happens. That should bring us some confidence because salvation is truly God’s work. All he needs us to do is open our mouths and share what we know about him. Surely, we can do that.