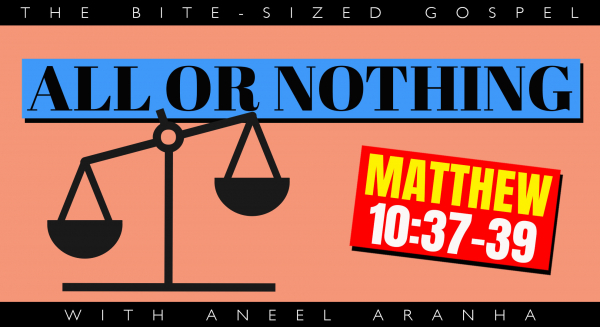 My reflections often get criticized because they are tough. But the reason they are that way is because Jesus was tough. Just look at what he has been saying. “I have not come to bring peace,” he said, “but a sword. I have come to turn a man against his father, and a daughter against her mother. One’s enemies will be from one’s own household.” And then, in the passage we are reflecting on today, Jesus says that anybody who loves father or mother or son or daughter more than him is not worthy of him, and if anybody wants to follow him, they have to be willing to die.

How do you expect me to present this? By telling you that Jesus was exaggerating and didn’t really mean what he said? I’m not going to do that, and I know that you don’t want me to do that because you’re tired of all the sugar-coated, watered-down, corrupted rubbish that people are feeding us and want the real stuff. And how do I know what YOU know? Because there are now thousands of people who read these reflections, watch them, or listen to them daily. You want the *real* stuff. So what’s the real stuff here? What *did* Jesus mean?

Simply this. If we, as a practitioner of another faith, had an encounter with Christ, then we would want to follow him. This would antagonize our family members, which is not really surprising. Brought up in the faith of our ancestors, they believe in what they have been taught, and believing anything else is apostasy. Apostasy often merits punishment, including shunning, ex-communication, verbal abuse, physical violence, or even execution. We know this to be true.

So, following Jesus can set us up in opposition — very hostile opposition — with members of our own families. So who do we choose? Our family or Jesus? With Jesus, it is an all-or-nothing proposition. He makes it very clear here. He says that if we follow him, we must carry our cross. Carrying a cross is a metaphor for death. This basically implies that if we want to follow him, we have to be prepared to die. And at whose hands? Perhaps the hands of our own family members.

Now, if you think “I” am exaggerating, google the number of people who have been ostracized because of their beliefs or put to death. The number is in the thousands, and in the early days of the church was in the hundreds of thousands. Most went willingly to their deaths because they knew that — just as Jesus said — “those who find their life will lose it, but those who lose their life for Jesus’ sake will find it” (Matthew 10:39).

Tough, yes? But that’s Jesus, not me.