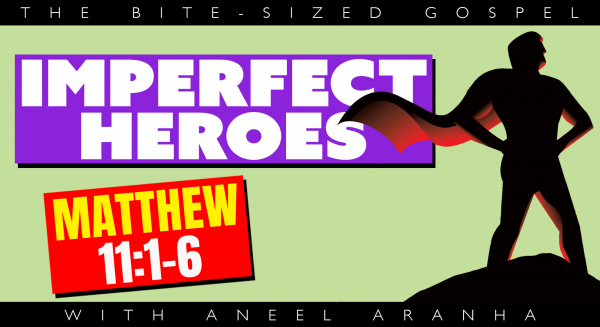 After Jesus had finished instructing his twelve disciples, he went on from there to teach and preach in the towns of Galilee. When John, who was in prison, heard about the deeds of the Messiah, he sent his disciples to ask him, “Are you the one who is to come, or should we expect someone else?” Jesus replied, “Go back and report to John what you hear and see: The blind receive sight, the lame walk, those who have leprosy are cleansed, the deaf hear, the dead are raised, and the good news is proclaimed to the poor. Blessed is anyone who does not stumble on account of me.”

Very often, when we read Scripture, we are forced to speculate about why somebody did what they did or said what they said because their motives are not revealed. In today's passage, we find John the Baptist sending two of his disciples to Jesus with a rather strange question: "Are you the one who is to come, or are we to wait for another?" The question is odd because it was John the Baptist who announced the arrival of Jesus. He said, "I baptize with water, but among you stands one you do not know. He is the one who comes after me, the straps of whose sandals I am not worthy to untie" (John 1:26-27).

Scripture says that "the next day John saw Jesus coming toward him and said, "Look, the Lamb of God, who takes away the sin of the world!" (John 1:29). John said many other wonderful things about Jesus, so it seems shocking that John would now be expressing doubt that Jesus was the Messiah! I have heard it suggested that John wasn't expressing doubt. His question was intended for the benefit of his disciples, to clear *their* doubt because he, himself, could never have doubted who Jesus was. Although the narrative doesn't support this theory, it could very well be the truth. As I said, without clear-cut facts, we have to speculate. But the real question is, why does John's doubt shock people so much?

The answer is because we tend to expect perfection from people we put on pedestals. I find this baffling because if there is one thing we should have learned from Scripture, it is that all its heroes failed at various points in their lives and sometimes failed miserably! David, of course, immediately comes to mind because of that sordid thing with Bathsheba, but Moses, Abraham, Jacob, Peter, Paul — every single one of them — goofed up on occasion. So why not John the Baptist? Did he cease being mortal because he was a prophet? Did temptations stop because he was a pious man? Did he never give in to temptation because he was so full of grace he just couldn't sin?

I want us to think about this today because we have unrealistic expectations of "holy" people. Consider Mother Teresa, who is almost universally respected as a holy woman. A book of letters written by her revealed that she was deeply tormented about her faith and suffered long periods of doubt about God. These things are part of the faith journey. What matters is that we complete the journey despite the obstacles that come our way. That is what makes us heroes.