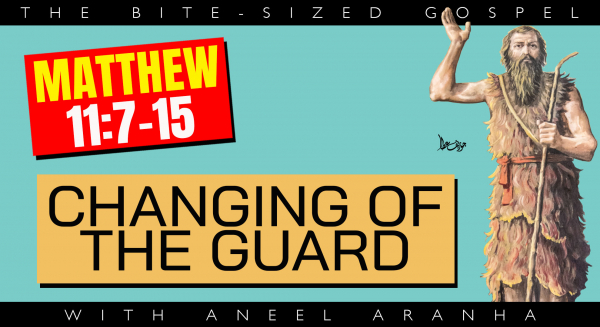 As John’s disciples were leaving, Jesus began to speak to the crowd about John: “What did you go out into the wilderness to see? A reed swayed by the wind? If not, what did you go out to see? A man dressed in fine clothes? No, those who wear fine clothes are in kings’ palaces. Then what did you go out to see? A prophet? Yes, I tell you, and more than a prophet. This is the one about whom it is written: “‘I will send my messenger ahead of you, who will prepare your way before you.’ Truly I tell you, among those born of women there has not risen anyone greater than John the Baptist; yet whoever is least in the kingdom of heaven is greater than he. From the days of John the Baptist until now, the kingdom of heaven has been subjected to violence, and violent people have been raiding it. For all the Prophets and the Law prophesied until John. And if you are willing to accept it, he is the Elijah who was to come. Whoever has ears, let them hear.

This is a very enigmatic passage, almost like a riddle, but once we realize that John the Baptist was the last of the “old order” and Jesus would usher in a “new order,” everything falls into place. So, what did Jesus mean when he said that among those born of women, no one has arisen greater than John the Baptist? Quite simply, prophets before him had predicted the coming of the Messiah, but John the Baptist would actually see him and testify about him.

So why is he the least in the kingdom of heaven, then? Because although he has seen the Messiah, he still lived according to the Old Covenant. Those born after him who accepted Christ as Savior would be people who were citizens of the Kingdom of Heaven. They would have seen the fulfillment of God’s plan, whereas John was still looking forward to its fulfillment. Remember, John the Baptist would die before Jesus died and rose again.

And what did Jesus mean when he said that “from the days of John the Baptist until now the kingdom of heaven has suffered violence, and the violent take it by force”? This can be confusing because of how we generally understand violence and how it is used twice in the same sentence. However, they are declaring two separate things, and breaking them up makes it easier to understand.

The kingdom of heaven suffers violence when those opposed to it attack it. In Jesus’ time, these would be people like the scribes and Pharisees who did not understand John’s call to repentance and opposed him and his aim to prepare the way for the Lord. The second part makes sense if one looks at the word “violent” as meaning “strength of emotion” or “forcefulness” rather than how we typically understand the word.

People like John the Baptist did not lead an easy life. Opposed to the ways of the world, like the prophets before him, John led a life of mortification, penance, poverty, and austerity. He was determined to enter heaven, bulldozing his way through if necessary. Things changed after Christ. As Christians, we don't need to bulldoze our way into heaven, because Christ has saved us by grace.