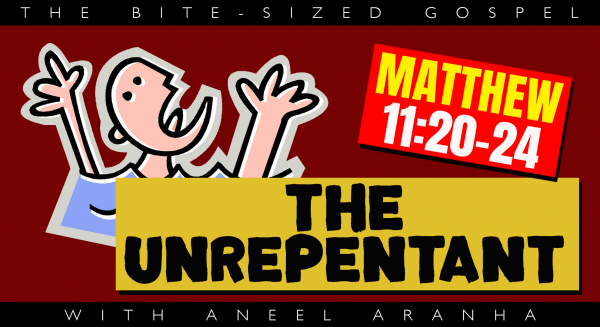 I was once invited to pray with a man who was dying. He was born a Christian but had lost his faith over the years. Now that he had a few hours to live, I thought he might accept Jesus as savior again. However, he said—not without a little sadness—that he had been an atheist for so long, it would be hypocritical for him to turn to Christ simply because he was dying. I understood his reasoning but couldn’t help thinking how pride could prevent one from repenting, even at the cost of eternal damnation.

I’d like to think that after I left, he had a chance to think things over, and like the thief on the cross turned to Jesus at the last moment, but I know that there are many, many people who will remain unrepentant. What would Jesus say to them? Exactly what he said to the people of Chorazin and Bethsaida. “If the deeds of power done in you had been done in Tyre and Sidon, they would have repented long ago. But on the day of judgment it will be more bearable for them than for you.”

What was the point of Jesus’ warning? Not that Tyre and Sidon would receive mercy, but that those who would not repent after hearing the gospel would receive a greater punishment. So why not repent and be spared? Speaking for God the prophet Ezekiel said (I paraphrase): Repent! Turn away from all your offenses; then sin will not be your downfall. Get a new heart and a new spirit. Why do you want to die? I take no pleasure in the death of anyone, so repent and live! (Ezekiel 18:30-32).

I have been speaking about how tough these reflections have been over the past few weeks and the reason for that is because Jesus is tough. Why is he tough? Because he loves us. He doesn’t want any of us to perish. We have to remember that he came down to earth, lived among sinful man like an ordinary human, and died terribly for our sins. Through this he secured eternal life for us. And to ensure that we didn’t lose it, he gave us his Holy Spirit.

None of us can make it to heaven on our own merit. It is only faith in Jesus that can take us there. When the Jews asked Peter what they needed to do to be saved, he told them: “Repent and be baptized, every one of you, in the name of Jesus Christ for the forgiveness of your sins” (Acts 2:38). If we consciously reject that, then we must be prepared for the consequences that follow.

Let us not be among the unrepentant, dear friend. Let us repent and live.