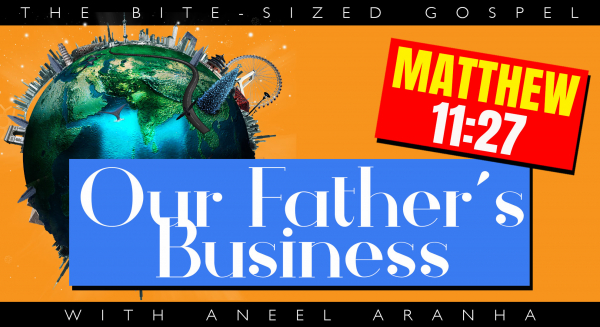 Christ has just thanked his Father for keeping certain truths hidden from the wise and learned and revealed them to little children. He means that those who believe they are wise and reject God as a result of their alleged wisdom are unable to see the truth, while those the world generally dismisses as simpletons can see divine realities.

The good news is that Christ has made the Father known to *all* of us. He has also made the Father’s *business* known to us. Just before his Passion, Jesus told his apostles: I no longer call you servants, because a servant does not know his master’s business. Instead, I have called you friends, for everything that I learned from my Father I have made known to you” (John 15:15).

So, what is the Father’s business? It’s saving the world! You undoubtedly know John 3:16, where Jesus declared: “For God so loved the world that he gave his one and only Son, that whoever believes in him shall not perish but have eternal life” (John 3:16). God sent Jesus down to save the world. That was his mission. In turn, he made it ours. “Go make disciples of all nations,” he said (Matthew 28:19).

In any parent-child relationship, a parent has certain responsibilities to fulfill. But, correspondingly, a child has certain duties they have to fulfill. If we want the rights of a child, we need to fulfill the duties of a child. Our duty is to carry out our Father’s business. And, hopefully, when we enter heaven, our Father will say to us: “You are my child, whom I love; with you I am well pleased.”