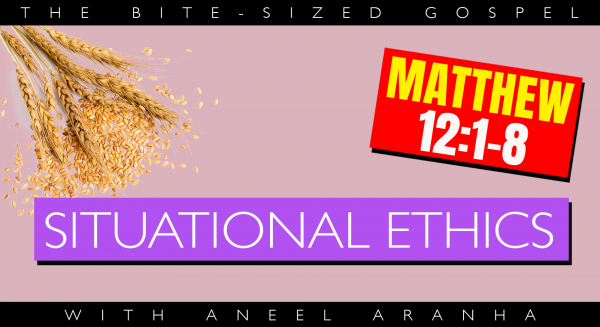 At that time Jesus went through the grainfields on the Sabbath. His disciples were hungry and began to pick some heads of grain and eat them. When the Pharisees saw this, they said to him, “Look! Your disciples are doing what is unlawful on the Sabbath.” He answered, “Haven’t you read what David did when he and his companions were hungry? He entered the house of God, and he and his companions ate the consecrated bread—which was not lawful for them to do, but only for the priests. Or haven’t you read in the Law that the priests on Sabbath duty in the temple desecrate the Sabbath and yet are innocent? I tell you that something greater than the temple is here. If you had known what these words mean, ‘I desire mercy, not sacrifice,’ you would not have condemned the innocent. For the Son of Man is Lord of the Sabbath.”

The title of today’s reflection is “Situational Ethics.” It simply means that one chooses how to act based on the needs of a situation rather than absolute moral standards. You may have heard the saying, “The end justifies the means.” Or, the phrase, “Choosing the lesser of two evils.” Or “the greatest good for the greatest number.” These are all examples of situation ethics. So, why are we talking about this here? Because it “seems” that Jesus may be doing this in today’s story.

Let me explain. The Jews were not allowed to work on the Sabbath. This included sowing and planting. Many things were prohibited to ensure they did not break this rule. For instance, people were not allowed to spit on the ground because the spittle might fertilize the soil. Yes, I know it sounds absurd, but never mind; we sometimes do equally absurd things. Harvesting was also forbidden. Plucking the heads of grain constituted harvesting.

So, when the disciples did this — plucking the heads of grain — because they were hungry, the Pharisees said they were breaking the laws of the Sabbath. And then, as if to justify their actions, Jesus spoke about how David broke the law, and nobody said anything. Situational ethics? Not at all. So let us try to understand what happened in a few words.

One, the Pharisees were always accusing Jesus of doing what was wrong, but that was because THEIR understanding and interpretation of Scripture was wrong. Two, the disciples weren’t breaking any laws because they were not really harvesting or cooking a meal; they were simply eating.

Three, David did break the law — to a certain degree — but Jesus was not justifying David’s actions. Jesus was telling the Pharisees that they had double standards. They let what David did pass but took exception to what the disciples did, which was guiltless. Besides, what the priests did was also — to a certain degree — breaking the law. But, all said, one thing mattered: mercy. We are also guilty of the same thing: always accusing, always pointing fingers, always finding fault. Why?

Let’s try mercy, shall we? Because as Jesus said, blessed are the merciful, for they shall be shown mercy.