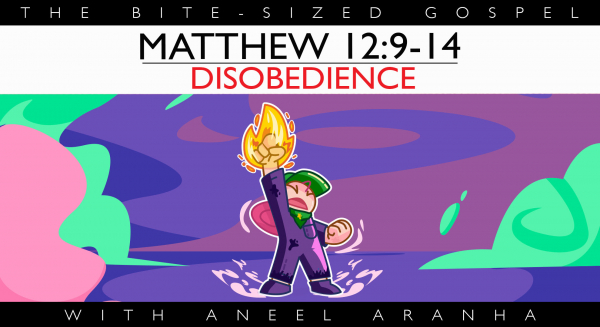 Going on from that place, he went into their synagogue, and a man with a shriveled hand was there. Looking for a reason to bring charges against Jesus, they asked him, “Is it lawful to heal on the Sabbath?” He said to them, “If any of you has a sheep and it falls into a pit on the Sabbath, will you not take hold of it and lift it out? How much more valuable is a person than a sheep! Therefore it is lawful to do good on the Sabbath.” Then he said to the man, “Stretch out your hand.” So he stretched it out and it was completely restored, just as sound as the other. But the Pharisees went out and plotted how they might kill Jesus.

Obedience to authority is needed and often a good thing. Without obedience, there would be anarchy. Christians have been advised since the early days of the church to be obedient to authority. In his letter to the Romans, Paul states clearly: “Let everyone be subject to the governing authorities, for there is no authority except that which God has established. The authorities that exist have been established by God” (Romans 13:1). This would obviously mean that we are to be obedient to religious authorities as well.

In today’s passage we find that Jesus is disobedient to the religious authorities. And it is not the only time he has done so. We find another instance when he allowed his disciples pluck corn from the fields and then explained why this was okay to the outraged Pharisees (see Matthew 12:1-8). Then we find Peter and the apostles also disobeying the direct orders of the Sanhedrin not to talk about Jesus.

So, when is it ok to disobey orders from those in civil authority? We get a clue from Peter and the other apostles response to the Sanhedrin. “We must obey God rather than human beings!”, they said (Acts 5:29). When a government’s commands conflict with God’s commands, we must follow the Lord. This might very well result in consequences, but we should be prepared to accept that. The apostles were flogged for their disobedience. Daniel, who is another example, was thrown into a den of hungry lions.

When is it okay to disobey those in religious authority? When they are observably wrong. Scripture advises obedience in many circumstances, but unjust or irrational obedience is never required or demanded. But even when leaders demand obedience to something that is unjust or irrational, discernment and discretion is required. Seeking God’s counsel is essential in order to determine our response.
After all, we are not as wise as Jesus.