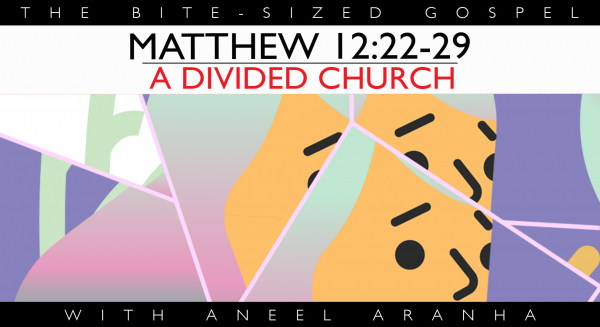 Then they brought him a demon-possessed man who was blind and mute, and Jesus healed him, so that he could both talk and see. All the people were astonished and said, “Could this be the Son of David?” But when the Pharisees heard this, they said, “It is only by Beelzebul, the prince of demons, that this fellow drives out demons.” Jesus knew their thoughts and said to them, “Every kingdom divided against itself will be ruined, and every city or household divided against itself will not stand. If Satan drives out Satan, he is divided against himself. How then can his kingdom stand? And if I drive out demons by Beelzebul, by whom do your people drive them out? So then, they will be your judges. But if it is by the Spirit of God that I drive out demons, then the kingdom of God has come upon you. “Or again, how can anyone enter a strong man’s house and carry off his possessions unless he first ties up the strong man? Then he can plunder his house.

Beelzebul—or Beelzebub—is associated with the Canaanite god Baal and is considered a major demon. In the Christian context, Beelzebul is another name for Satan. He is known in demonology as one of the seven princes of Hell and is described as a being capable of flying. Hence he is known as the "Lord of the Flyers" or the "Lord of the Flies." Readers might recognize the latter as the title of a book by William Golding, which was a brilliant study of human behavior without rules. But that isn't what I want us to reflect upon today.

I want us to reflect on something that Jesus said in response to the comments made by the crowds in today's reading. Jesus delivers a man from a demon, and yet again, the Pharisees criticize Jesus, with some saying, "He drives out demons by the power of Beelzebul, the prince of demons." Jesus questions their logic. "Really? A kingdom divided against itself will fall, won't it? If Satan is divided against himself, how will his kingdom stand?"

This is an important principle. If Satan is divided against himself, his kingdom cannot stand. Likewise, if the church is divided against itself, the church cannot stand. And this is a strategy that Satan has been using against us from the beginning of time and largely succeeding. Do you see how leaders in the church fight with each other? Do you see how PEOPLE in the church fight with each other? Divide and rule. The British developed the divide-and-rule strategy into a fine art allowing the tiny nation to conquer half the world. But Satan got there long before the British did, and he does this in the church with terrible consequences.

What's the antidote? Quite obviously, it is unity. Consider the fingers of one hand. If the fingers are spread out, they can easily be broken. But if they clench themselves into a fist, not only can it not be broken, it can be used to fight. And we need to fight, not with each other, but with the enemy who divides. Jesus knew he would do this, which is why one of his final prayers to the Father before his Passion was for unity. He said: "(I pray) that they may be one as we are one — I in them and you in me—so that they may be brought to complete unity" (John 17:22-23).

Paul, too, urged unity several times: "I appeal to you, brothers and sisters, in the name of our Lord Jesus Christ, that all of you agree with one another in what you say and that there be no divisions among you, but that you be perfectly united in mind and thought" (1 Corinthians 1:10). He also said: "Make every effort to keep the unity of the Spirit through the bond of peace" (Ephesians 4:3). Unity is the way of God. Division is the way of the devil.

Who do we follow: God or the devil? Our actions will determine this, not our professions of faith. Let us be united as children of one God.