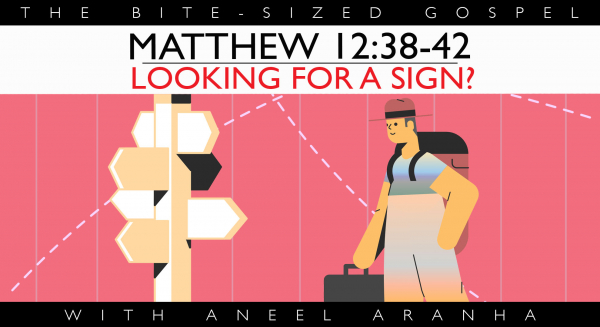 But what describes an evil generation? The first thing that probably comes to mind is sexual immorality, violence, murder, crime, and other overt sins. While these are undoubtedly evil, Jesus speaks about something else that characterizes an “evil generation.” They ask for a sign. There is nothing wrong with seeking signs — I am sure we do too — but weren’t the Pharisees given enough signs already? The people had just “brought him a demon-possessed man who was blind and mute, and Jesus healed him so that he could both talk and see. And the people were astonished and said, “Could this be the Son of David?” (Matthew 12:22-23).

“But when the Pharisees heard this, they said, “It is only by Beelzebul, the prince of demons, that this fellow drives out demons” (Matthew 12:24). So, see, they recognize that a man has been delivered and healed — that’s a sign, yes? — but they say that Jesus did it in the name of Beelzebul. Why? Because they didn’t really want to believe. Jesus told them that the only sign they were now going to see was the sign of Jonah. Just as Jonah spent three days in the belly of a fish, he would spend three days in the belly of the earth. But when this happened — when Jesus died and rose again — do you think they believed? Sure, some did. But most did not.

The same is true for us today. There is overwhelming evidence to show us that Jesus is God, but the problem isn’t a lack of evidence. The problem is one of the heart. Our hearts are hard. Just before Jesus delivered the demon-possessed man, he had healed a man with a shriveled hand. The Pharisees were witnesses to this miracle too, but they didn’t believe. Scripture says that Jesus was “deeply distressed at their stubborn hearts” (Mark 3:5). Then they plotted to kill him. For what? Healing a man?

If we look at our generation today, we can see the same two things at play. One, people keep asking for a sign! What do they want? Pyrotechnics? It takes place every time there is a storm! The sun to disappear in the middle of the day? It happens every time there is a solar eclipse. But these are natural phenomena, they will argue. How about a man dying and resurrecting from the dead? Oh, that never happened. But just in case it did, let us kill him all over again. Oh, you poor, poor people. Don’t you know what happened after they killed him the first time? He came back again. But then he came to show mercy.

This time he’ll be coming to judge men.