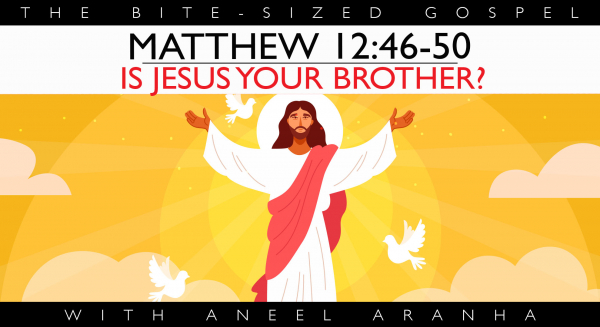 “Whoever does the will of my Father in heaven is my brother and sister and mother.” I know of very few people in the history of the world, Scriptural heroes included, who did the will of God right from the time they were young. One such person was Mary, who was barely a teenager when an angel appeared to her one fateful day. When the angel told her that she was going to give birth to the Son of God, I am not sure how much she really understood, but she said nonetheless: “I am the Lord’s servant. May your word to me be fulfilled.” (Luke 1:38).

And Mary continued to let God’s word be fulfilled in her life as she walked in obedience to him. According to what Jesus said in today’s passage, this qualified Mary as his mother, even if she were not REALLY his mother. But the fact is that she was and is deserving of the respect owed to the mother of our Lord. And, when we do, we might find Mary to be an excellent role model in how to be obedient to God.

And we need to be obedient to God. The entire point of what Jesus said was to tell us that obedience is what truly determines our relationship with him, not mere declarations that he is Lord. Elsewhere, he warned us of the consequences of disobedience. Speaking of the day when he would judge us, he said: “Not everyone who says to me, ‘Lord, Lord,’ will enter the kingdom of heaven, but only the one who does the will of my Father who is in heaven. Many will say to me on that day, ‘Lord, Lord, did we not prophesy in your name and in your name drive out demons and in your name perform many miracles?’ Then I will tell them plainly, ‘I never knew you. Away from me, you evildoers!’” (Matthew 7:21-23).

Jesus will consider those who obey the will of God as members of his family. We often struggle with obedience; we don’t even like the word. But if a young teenager named Mary could be obedient to God and remain obedient despite all her struggles, then perhaps we might be inspired to do so as well.