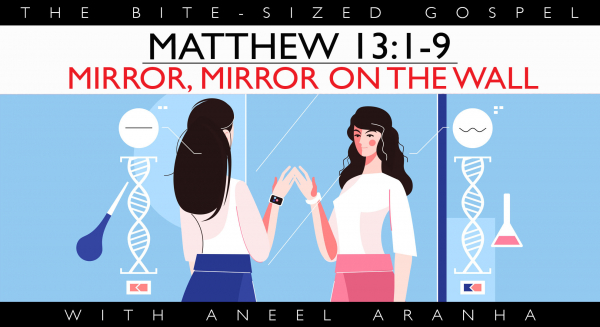 That same day Jesus went out of the house and sat by the lake. Such large crowds gathered around him that he got into a boat and sat in it, while all the people stood on the shore. Then he told them many things in parables, saying: “A farmer went out to sow his seed. As he was scattering the seed, some fell along the path, and the birds came and ate it up. Some fell on rocky places, where it did not have much soil. It sprang up quickly, because the soil was shallow. But when the sun came up, the plants were scorched, and they withered because they had no root. Other seed fell among thorns, which grew up and choked the plants. Still other seed fell on good soil, where it produced a crop—a hundred, sixty or thirty times what was sown. Whoever has ears, let them hear.”

One can understand this parable through these reflections. They go out to thousands of people in text, video, and audio formats. But the effect they have differs from person to person. Not everyone responds the same way. Let us, for a deeper understanding, consider yesterday's reflection on obedience. I spoke about how our obedience to God's will determined our relationship with Jesus.

Now, not all who receive these reflections bother to listen to them (or read or watch them). Even though they might have subscribed to them, they ignore the messages when it appears in their WhatsApp window. Ditto if they appear on social media. These are the seeds that fall on the path. The birds come and eat them. They don't have a chance to germinate, much less grow and bear fruit.

Then, some read the reflections and are sufficiently impressed with them to put them into practice. They hide their vodka or whiskey bottles, tell their latest lover they can't see them any longer, promise themselves they won't pay bribes to gain business, etc. But then a couple of days pass, and the depression, the loneliness, or the fear strikes again, and the bottle is out, the lover is back, and the wallet is extracted from the pocket. They are not rooted in Christ.

Then, there are those who read the reflections but get angry and upset by what they read because it literally acts like a reflection — revealing spots, blemishes, and all — and they don't like what they see. So, instead of being humble and correcting what is wrong, they get aggressive and hate the reflections and the person who puts them out. It's like breaking a mirror because you have a pimple on your nose. How is it the mirror's fault? These are the thorns Jesus speaks about.

And, then, there are those who read the reflections and realize they might provide an accurate description of their nature. Wanting to change, they turn to God in repentance, asking for his mercy and grace to become better people. And God, in turn, heals them, nurtures them, nourishes them, and helps them to grow. And grow, they do.

But don't take my word for it. Try it and see. You will bear much fruit.