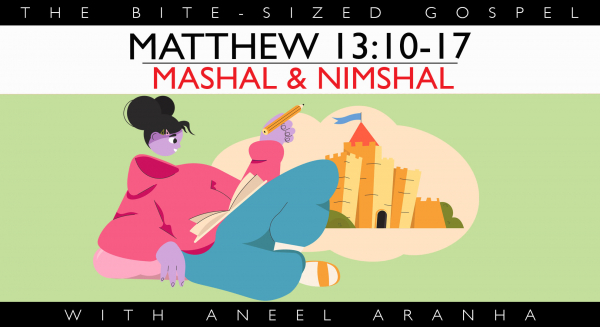 The disciples came to (Jesus) and asked, “Why do you speak to the people in parables?” He replied, “Because the knowledge of the secrets of the kingdom of heaven has been given to you, but not to them. Whoever has will be given more, and they will have an abundance. Whoever does not have, even what they have will be taken from them. This is why I speak to them in parables: “Though seeing, they do not see; though hearing, they do not hear or understand. In them is fulfilled the prophecy of Isaiah: “‘You will be ever hearing but never understanding; you will be ever seeing but never perceiving. For this people’s heart has become calloused; they hardly hear with their ears, and they have closed their eyes. Otherwise they might see with their eyes, hear with their ears, understand with their hearts and turn, and I would heal them.’ But blessed are your eyes because they see, and your ears because they hear. For truly I tell you, many prophets and righteous people longed to see what you see but did not see it, and to hear what you hear but did not hear it.”

One of the most common misconceptions about the Parables of Jesus is that they were simple stories Jesus told that his listeners would find easy to understand. However, that is not quite true. The stories were neither simple, not would the listeners find them easy to understand. Why? Let me first tell you about the Jewish method of story telling. It was called the Mashal and Nimshal method.

When a rabbi wanted to teach a lesson, he would make up a story. He would craft it in such a way as to hide its purpose, but at the same time, designed to intrigue. This was the mashal. For a wonderful example, consider the story Nathan told David. You might know this story. King David committed adultery with Bathsheba. God sent the prophet Nathan to confront David. The prophet told him a story.

He said: “There were two men in a city, one was rich, the other poor. The rich man had very many flocks and herds; but the poor man had nothing but one little lamb, which he loved and looked after like his own child. One day the rich man had a visitor, but instead of taking an animal out of his own large flock, he took the poor man’s lamb and prepared it for his guests. You’ll find the whole story in 2 Samuel 12.

See how well the story was crafted. It was guaranteed to get an emotional response from the listener. At the same time it was so opaque that although the sin of the rich man was evident, David couldn’t determine the point the storyteller was trying to make, which was point out David’s sin. This was the marshal. So what happened. David got angry with this rich man. He told Nathan the man should die for the terrible thing he did. And now it was time for the nimshal, which is an explanation of the mashal. Nathan said to David, “You are the man!”.

We sometimes forget that Jesus was Jewish. And as a rabbi he used this method in the stories that he told, although he would very rarely provide the nimshal. This was a deliberate omission because he wanted the listener—the interested listener—to think deeply about the mashal. In the process the listener would gain several insights into the subject because in the absence of a clear-cut explanation the mind travels in many directions.

Today’s reflection is a little like that. You have the mashal; and a little bit of the nimshal. Now you figure out the rest.