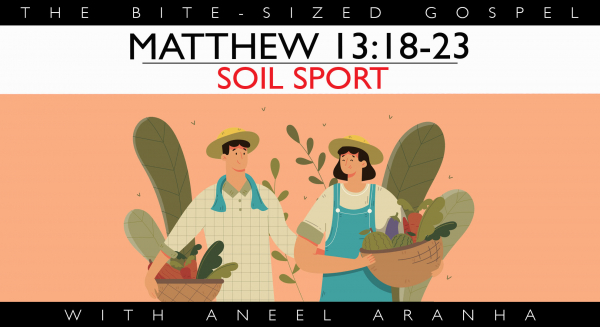 Jesus said: “Listen then to what the parable of the sower means: When anyone hears the message about the kingdom and does not understand it, the evil one comes and snatches away what was sown in their heart. This is the seed sown along the path. The seed falling on rocky ground refers to someone who hears the word and at once receives it with joy. But since they have no root, they last only a short time. When trouble or persecution comes because of the word, they quickly fall away. The seed falling among the thorns refers to someone who hears the word, but the worries of this life and the deceitfulness of wealth choke the word, making it unfruitful. But the seed falling on good soil refers to someone who hears the word and understands it. This is the one who produces a crop, yielding a hundred, sixty or thirty times what was sown.”

The Parable of the Sower is one of the few parables that Jesus actually explained. It is, for those who missed yesterday, about a sower who throws seed onto soil. The seed falls on four types of soil: hard soil, rocky soil, thorny soil, and good soil. Jesus says that these soils represent four types of people and then goes on to explain what each one is. As a sower of the seed, which is the word of God, I have encountered all four types and some personal glimpses might prove illuminating so let’s take them in turn.

First: hard soil. These are hard-hearted people. They attend mass services, retreats, and prayer meetings but don’t seem to understand anything. This isn’t because they are stupid; on the contrary, many of these are very intelligent. So why don’t they understand? Because their hearts are hard and nothing can penetrate. They have their own belief system and they will listen to what you have to say, but have no interest in really understanding it because they have made up their minds about everything a long time ago.

Second: rocky soil. These people are a preacher’s delight. Well, at least at first. They hear the word of God and the joy in their faces is so transparent, it makes the entire job of proclaiming the word of God seem so incredibly satisfying. Unfortunately this doesn’t last long, because theirs is only an emotional response to something that makes them feel good at that particular moment. They don’t have a solid foundation. Like a plant without roots that are deep, these people wither away at the slightest sign of persecution.

Third: thorny soil. At the end of every retreat that I preach, I invite people to a deeper commitment to a program that requires a mere three hours a week, and although the response is wonderful, there are many who don’t join saying the reason is because they have other commitments: house cleaning, taking their children to sports practice, their TV time, and similar excuses. I do not deprecate the importance of these activities, but I do question the priorities. God and spiritual growth is usually at the bottom of the list.

So, which of these four types of soil best describes you. You can become good soil you know, because your father, as Jesus tells us, is the gardener.