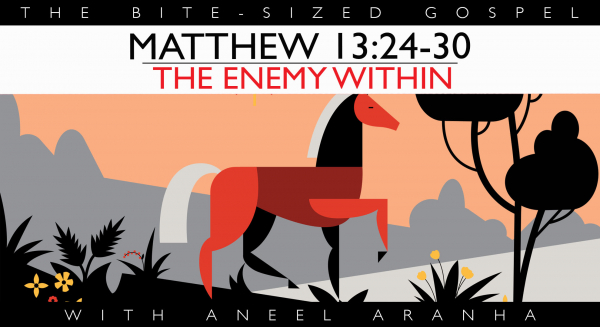 Jesus told them another parable: “The kingdom of heaven is like a man who sowed good seed in his field. But while everyone was sleeping, his enemy came and sowed weeds among the wheat, and went away. When the wheat sprouted and formed heads, then the weeds also appeared. “The owner’s servants came to him and said, ‘Sir, didn’t you sow good seed in your field? Where then did the weeds come from?’ “‘An enemy did this,’ he replied. “The servants asked him, ‘Do you want us to go and pull them up?’ “‘No,’ he answered, ‘because while you are pulling the weeds, you may uproot the wheat with them. Let both grow together until the harvest. At that time I will tell the harvesters: First collect the weeds and tie them in bundles to be burned; then gather the wheat and bring it into my barn.’”

I love chess. It is a game of strategy, which means that to win, you must have a better plan of action than your opponent. Knowing how your opponent thinks is vital, because it helps anticipate his moves better.

In his letter to the Ephesians, Paul tells us to “take (our) stand against the devil’s schemes. For our struggle is not against flesh and blood, but against the rulers, against the authorities, against the powers of this dark world and against the spiritual forces of evil in the heavenly realms” (Ephesians 6:11b-12). So we are in a war against an enemy who schemes, which is another word for strategizes. Now, if you wanted to take down a city that has strong defenses, what’s the best way to do it?

Take it down from within. After a fruitless 10-year siege of the Trojan city of Troy, the Greeks constructed a giant wooden horse and hid a select force of men inside, including Odysseus. The Greeks pretended to sail away, and the Trojans pulled the horse into their city as a victory trophy. That night the Greek force crept out of the horse and opened the gates for the rest of the Greek army, which had sailed back under cover of night. The Greeks entered and destroyed the city of Troy, ending the war.

Now, I don’t wish to be alarmist, but if I wanted to hurt the church, what better way than from the inside? Jesus warned, “For false messiahs and false prophets will appear and perform great signs and wonders to deceive, if possible, even the elect” (Matthew 24:24). In today’s parable, he speaks about the weeds among the seed, planted IN the field! Peter also warns: “There will be false teachers AMONG you. They will secretly introduce destructive heresies, even denying the sovereign Lord who bought them” (2 Peter 2:1). Note the word “secretly.”

So, what do we do? We must ensure we know God’s word as revealed to his church. If we hear something wrong, we will catch it (see Acts 17:11). We also need to see the fruit that people bear. Miracles can be counterfeited; fruit cannot (see Matthew 7:18). Thirdly, remember Jesus’ promise to Peter. “You are Peter, and on this rock I will build my church, and the gates of Hades will not overcome it” (Matthew 16:18). No matter how good a strategist the enemy might be, he is no match for our God.

Let us remember that always.