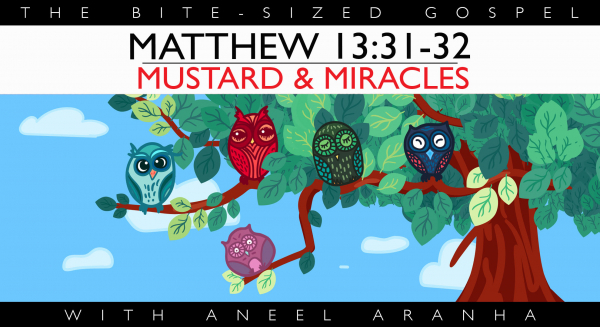 He told them another parable: “The kingdom of heaven is like a mustard seed, which a man took and planted in his field. Though it is the smallest of all seeds, yet when it grows, it is the largest of garden plants and becomes a tree, so that the birds come and perch in its branches.”

Jesus said these things to his small band of merry men. From all appearances, it didn't seem like these men would be able to do anything — they were very simple men, remember — but Jesus was telling them this was true. If they had just a little faith, they could ­make a huge difference in the world. There would, undoubtedly, be immense challenges that they would face, but they were not to be daunted by them because they would be able to deal with any situation that came their way. This parable that we heard today about the mustard seed reinforced this idea. "When it has grown," Jesus said, "birds of the air will make nests in its branches."

His words echoed something the prophet Ezekiel had said years earlier. "On the mountain height of Israel I will plant it, in order that it may produce boughs and bear fruit, and become a noble cedar. Under it every kind of bird will live; in the shade of its branches will nest winged creatures of every kind." (Ezekiel 17:23). Now, why didn't Jesus use the same analogy of the mighty cedar that Ezekiel did? This is a symbol the people would have understood because Lebanon's cedars were famous. But as we've discovered, the parables weren't supposed to be easy to understand. Jesus wanted his listeners to think about what he said and think beyond the obvious.

To speak about a cedar tree growing tall was nothing of great note; people EXPECTED cedar trees to grow tall. But to speak of a mustard plant growing tall and becoming a tree was out of the ordinary — it was something miraculous. And Jesus wanted them to understand that the growth of the kingdom was precisely that—miraculous! That IS what happened. God grew his church to the enormous size that it became — miraculously. He did this through his apostles. The word they sowed in all corners of the world sprouted, and people from every nation came to take refuge in the church that was formed. That is birds making nests in branches.

So let's go out there and start sowing.