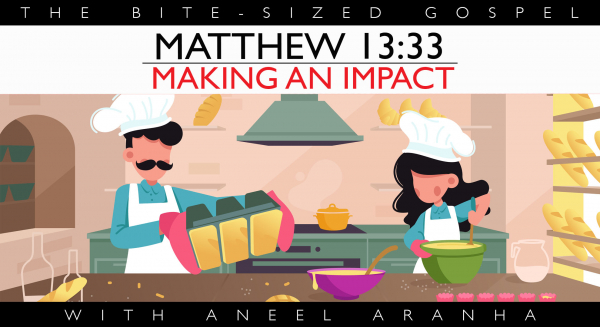 He told them still another parable: “The kingdom of heaven is like yeast that a woman took and mixed into about sixty pounds of flour until it worked all through the dough.”

In this Parable of the Yeast, as in the Parable of the Mustard Seed, Jesus is talking about how something very tiny, like yeast (which is molecular), can lead to something huge like the church has become today. We are the yeast, and we can learn a bit from looking at a couple of its properties.

One. The purpose of yeast is to make the dough rise so that it becomes light, fluffy, and easy to eat. It isn’t to give the dough a particular flavor, although there are certain makers of sourdough who try to do that. Similarly, the Church has a purpose, which is stated in one form or another in all four gospels. Here it is from one. And Jesus came and said to them, “All authority in heaven and on earth has been given to me. Go therefore and make disciples of all nations” (Matthew 28:18).

We need to remember this primary purpose. Our pastors have become administrators rather than evangelists. Others have become social workers instead of missionaries. And still, others have become politicians instead of kingdom growers. We must remind ourselves of our mission beyond the sermons we prepare or hear during church services!

Two. Yeast is microscopic, yet it will spread right through the dough, given some time. We have examples not just in the spiritual world but also in the secular world of how a few people were able to make a massive impact on society, like Rosa Parks, a black woman who sparked the Civil Rights movement in the US in the 1950s. Or Mikhail Gorbachev, who brought about the fall of the Iron Curtain in 1990. Or Mahatma Gandhi, who gained Independence for India through his non-violent movement.

But all these pale in comparison with what twelve men and a few companions succeeded in doing two thousand years ago. They took the gospel worldwide until the name of Christ was known in every corner of the globe. All it takes is the right ingredient­—a heart for God and his people. And then this yeast could be you. Every time we do something for God, whether it is a small Bible study group, a little leaflet telling people about Jesus, or a reflection like this one, it is like a little bit of yeast being added to the dough.

So, what are you going to do today?