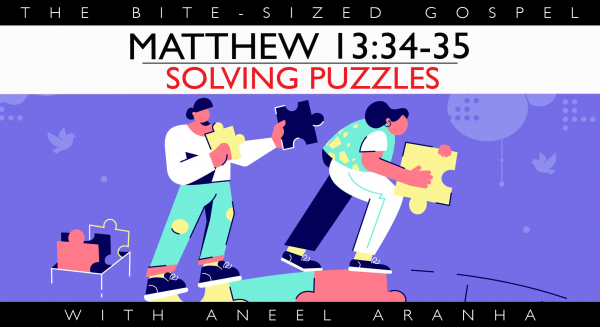 Jesus spoke all these things to the crowd in parables; he did not say anything to them without using a parable. So was fulfilled what was spoken through the prophet: “I will open my mouth in parables, I will utter things hidden since the creation of the world.”

Jesus' parables were simple stories that he told, but unlike what is commonly believed, they were not easy to understand. They were like puzzles that one had to solve. The question is: why? Why would Jesus make it difficult for people to understand God's truths? The reason is simple. He wanted his listeners to think about what he said, much like we would think about a clever riddle until we solved it. And, if we can't solve a riddle, what do we do? We ask the person who posed the question for the answer.

The disciples weren't great with riddles and often went to Jesus, asking him to explain what he said. We have only a couple of instances recorded in Scripture where he did, but presumably, he clarified all of them if they needed to arrive at the proper understanding. Jesus isn't around like he was 2,000 years ago, but we have the Holy Spirit. We can consult with him. Jesus told us that the Holy Spirit would teach us all things and remind us of everything that Jesus said (see John 14:26).

So, how does this work practically? Consider the Parable of the Yeast that preceded today's passage. It was a very short one where Jesus said the kingdom of heaven was like yeast that a woman took and mixed into about sixty pounds of flour until it worked through the dough. That's it. Someone who wasn't interested in knowing about the kingdom of heaven would probably roll their eyes and not give it any further thought.

However, the interested kingdom-seeker, the person who wanted to discover the knowledge of the secrets of the kingdom of heaven (Matthew 13:11), would not let go. Like a cow ruminating the cud, he (or she) would keep thinking of what Jesus said. Why did he say the kingdom of heaven was like yeast? What are the qualities of yeast? Well, it was tiny for one, microscopic. What else? By itself, it did nothing, but when it was mixed with dough, it made the dough rise, making it light and fluffy. Ok, we were getting somewhere. But the yeast, like the dough, had to symbolize something. What?

At this point, seeing our interest, the Holy Spirit might remind us of something that Jesus had said about believers being the light of the world and the salt of the earth. Could the yeast be us and the dough be the world? And everything suddenly falls into place. See, how easy it is? But only if we are interested in discovering God's truths; otherwise, his mysteries will remain mysteries.

Now, what fun is there in that?