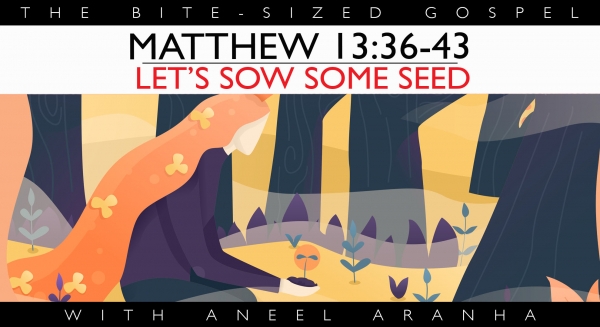 Then he left the crowd and went into the house. His disciples came to him and said, “Explain to us the parable of the weeds in the field.” He answered, “The one who sowed the good seed is the Son of Man. The field is the world, and the good seed stands for the people of the kingdom. The weeds are the people of the evil one, and the enemy who sows them is the devil. The harvest is the end of the age, and the harvesters are angels. “As the weeds are pulled up and burned in the fire, so it will be at the end of the age. The Son of Man will send out his angels, and they will weed out of his kingdom everything that causes sin and all who do evil. They will throw them into the blazing furnace, where there will be weeping and gnashing of teeth. Then the righteous will shine like the sun in the kingdom of their Father. Whoever has ears, let them hear.

We reflected on the Parable of the Weeds a few days ago. In today's reading, Jesus explains the parable. It is one of the only two parables that Jesus explained, the other being the Parable of the Sower. Most of the parable is easily understood, but let us examine the explanation again: "The one who sows the good seed is Jesus. The field where the seed is sown is the world. The good seed are the children of the kingdom. The weeds are the children of the evil one. The enemy who sowed them is the devil. The harvest is the end of the age. The reapers are angels." Nice and pat.

The only nagging question is the command of the owner — who is also the sower — not to uproot the weeds. Every farmer tries to protect his crop, plucking out the weeds that take away much-needed nutrition from the wheat he has planted. So, why does this guy not pluck them out? There are two possibilities. One is that the root systems had become intertwined, and destroying the weeds would also destroy the wheat. The other is that the weeds in question may have been darnel, which looks much like wheat in its early stages of growth, making it hard to distinguish between them.

The first possibility lends itself to believers being the good seed and the rest of the world, with its assorted beliefs—New Age, Atheism, Humanism, Secularism, etc.—being the bad seed. The influences of non-Christian philosophies have become so pervasive, especially in recent times, threatening the wheat's destruction, but Jesus' advice is to let them grow nonetheless. Just as we believe we are right, I am sure they believe they are correct, too, so it might be best to leave them be. There will be a final reckoning where everything will be resolved.

In the second possibility, where the weeds are darnel that is barely distinguishable from the wheat, this can mean it represents false believers. Is there such a thing? Yes. To all appearances, they look devout and holy, but inwardly they are very corrupt. The Pharisees that Jesus often berated offer an example. "You are like whitewashed tombs," he told them on one occasion. "You look beautiful on the outside but on the inside are full of everything unclean" (Matthew 23:27). These, too, will be taken care of in the final reckoning.

But there is a third reason why the weed is allowed to grow with the wheat, and this is a spiritual one. It gives time for the "children of the evil one" to become "children of the kingdom." We have seen this happen to millions of people over the years, and it can happen to millions more—especially those near and dear to us: family members, relatives, friends, and colleagues. We need to reach out to them. Let us learn, live, share our faith and help get everybody into heaven!