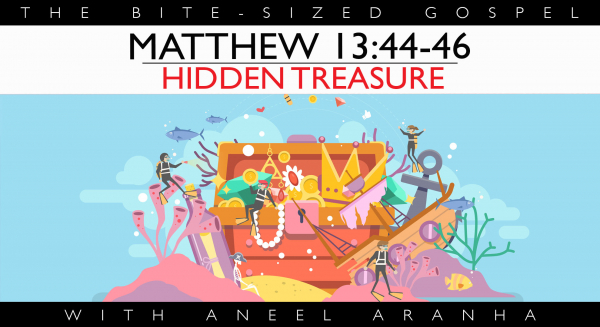 We have two parables here, one following the other. Let me tell you a third. There was a man called Rob Cutshaw who lived in North Carolina. Rob was an amateur rock hunter. A rock hunter is a guy who digs for pretty rocks that he can sell to tourists, collectors, and jewelry stores. One day Rob found a sparkling blue rock that he described as “purty and big.” He thought the rock might sell for $500, but he was so desperate for money he said he would have sold it for 100 dollars if somebody had made an offer.

But, when he couldn’t sell it, Rob took the rock home and put it in his closet. He then forgot all about it until a couple of years later, he decided to have the rock cut. To his amazement, he discovered what he had was the largest sapphire ever found up to that time, with a street value of $2,000,000! Now named ‘The Star of David,’ the sapphire has a value today of over 5 million dollars. We sometimes don’t know the value of what we possess. Do we know how valuable Jesus is?

I know that most of you watching these reflections have found Jesus. The question is: Do you know how valuable he is? Very valuable, you say. Ok, how much are you willing to give up to possess him? A rich young man — quite devout — went to Jesus one day and asked him for the secret of eternal life. Jesus told him that if he wanted to be perfect, to sell everything he had, give it to the poor, and then follow him. Scripture says the rich young man “went away sad because he had great wealth.” (see Mark 10:17-31). Would we fare better?

When we find Jesus, we enter the kingdom of heaven and become adopted as children of God. Although we are adopted, we are heirs of God and co-heirs with Christ (see Romans 8:17). Do we know how valuable our inheritance is? Again, I’m not sure. There was a guy called Esau in the Bible. He was Jacob’s elder brother. Esau was a hunter; one day, after returning from a hunt, he found his brother cooking some stew. “I’m famished,” he said. “Let me have a bowl.” Jacob said, “Sure, but first, sell me your birthright.” Do you know what Esau did? He sold his birthright for a bowl of stew! (see Genesis 25:29-34).

Can you imagine that? I know it horrifies us, the thought that Esau would do something like this. But if we introspect, we will see we do the same thing every day! We trade our birthright for momentary pleasure. We run after things without long-lasting value: wealth, power, and prestige. They all take us away from the great treasure that is Jesus. It is like chasing after plastic trinkets when we can have the crown of victory to wear forever.

So, let us not trade our inheritance for a bowl of soup. Or less.