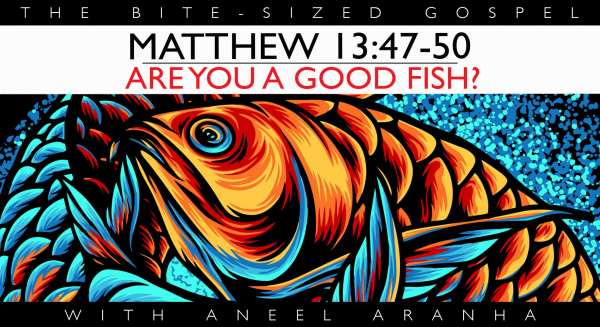 “Once again, the kingdom of heaven is like a net that was let down into the lake and caught all kinds of fish. When it was full, the fishermen pulled it up on the shore. Then they sat down and collected the good fish in baskets, but threw the bad away. This is how it will be at the end of the age. The angels will come and separate the wicked from the righteous and throw them into the blazing furnace, where there will be weeping and gnashing of teeth.

Jesus tells seven parables one after another in Matthew 13, but this one is different from the others in that while they speak about the present kingdom, this one speaks about the future kingdom—what follows after Judgment Day. The only other exception is the Parable of the Weeds.

On Judgment Day, the angels will separate the wicked from the righteous. Jesus doesn’t use the word ‘good’ when describing the sorting on Judgment Day; he uses the word ‘righteous.’ So who are the ‘righteous,’ then? Many of us believe we are righteous because of the good things we do, and how we, and the world, perceives us. But this is self-righteousness and does nothing except boost our egos. They don’t get us to heaven.

Consider the Pharisees who thought they were going to heaven because of all the rules they kept. They were very proud of the fact they never murdered anyone or committed adultery. Jesus tried to strip them of this self-righteousness by telling them if they so much as called someone a fool, they were guilty of murder, and if they looked at a woman with lust they were guilty of adultery. However, they didn’t get it.

What does this mean? It means we obtain our righteousness through Christ. Scripture says: God made him who had no sin to be sin for us, so that in him we might become the righteousness of God (2 Corinthians 5:21). When we repent and are baptized, the righteousness of Christ is imputed on us. This is known as justification and is what gets us the ticket heaven.

And as we journey through life, united with Christ, he keeps increasing as we keep decreasing. And on Judgment Day, when that net is pulled in, we will be among the good fish! Isn’t that wonderful?