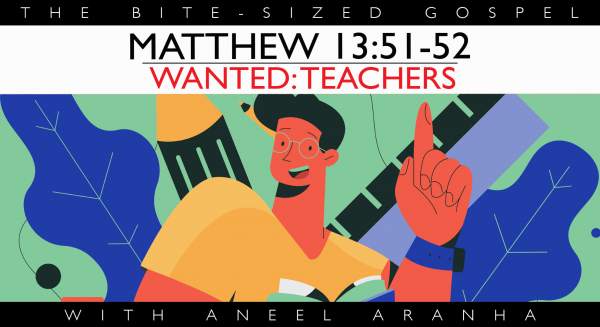 “Have you understood all these things?” Jesus asked. “Yes,” they replied. He said to them, “Therefore every teacher of the law who has become a disciple in the kingdom of heaven is like the owner of a house who brings out of his storeroom new treasures as well as old.”

Jesus had this terrible habit of speaking to people in riddles, and most of the time, they couldn’t understand anything he said. This is why I find what happens in today’s passage very amusing. Jesus tells his listeners seven parables in quick succession — The Sower, The Weeds, The Mustard Seed, The Yeast, The Hidden Treasure, The Pearl of Great Price, and The Net — and then asks his apostles: “Have you understood all this?” And they answer, “Yes.” And I go, “Wow! Really?”

Jesus also probably went, “Wow! Really?” But he doesn’t say anything; he tells them an eighth parable. He says (I paraphrase), “Ok, since you understand this, every teacher of the law who has become a disciple is like the master of a household who brings out of his treasure what is new and what is old.” He calls them teachers of the law — or scribes. This is ironic because, along with the Pharisees, the scribes have been his archenemies. They have constantly tried to trap him so that he would get into trouble with the Roman authorities. So, why is he calling his apostles scribes?

To understand this, we need to go back to the days when the Jews began returning to Jerusalem. If you recall, Jerusalem had been besieged by Nebuchadnezzar, ruler of Babylon (see Daniel 1:1-2). Over the years, more and more Jews were taken captive to Babylon. After the fall of Babylon to the Persian king Cyrus the Great, exiled Judeans were permitted to return to Judah. (Please don’t get turned off by this history lesson; it’s good to know these things.) The first batch of arrivals found the city and temple in total ruin.

They were authorized to rebuild both, but their spirit needed to be built up to do this. So, the prophet Ezra stood on a pulpit and began to teach the people. This is, by the way, the first time Scripture records that a pulpit was used to preach (see Nehemiah 8:4). Nehemiah followed Ezra, heralding the beginning of the ministry of the scribes. It was, as you can imagine, a powerful ministry. But, as it invariably happens, subsequent scribes began to offer interpretive opinions that they considered authoritative, and consequently, the scribes became a group of legalistic, self-righteous teachers. This describes the scribes of Jesus’ day.

By referring to his disciples as scribes, Jesus told them they would be the new teachers. Although they might not have understood much, they would eventually get it because Jesus would have explained it to them. They would also be trained to communicate these truths to others, especially once they applied them to their own lives. Because to teach well, we need experiential understanding, not just hard knowledge. This takes discipleship. Now, Jesus is looking for scribes today, those who will transmit their understanding of great kingdom truths that they have discovered and LIVED.

Are you one of them?