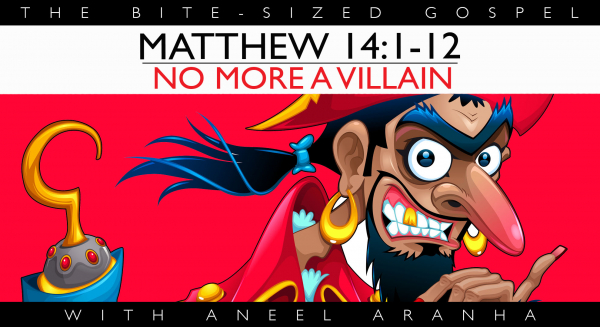 At that time Herod the tetrarch heard the reports about Jesus, and he said to his attendants, “This is John the Baptist; he has risen from the dead! That is why miraculous powers are at work in him.” Now Herod had arrested John and bound him and put him in prison because of Herodias, his brother Philip’s wife, for John had been saying to him: “It is not lawful for you to have her.” Herod wanted to kill John, but he was afraid of the people, because they considered John a prophet. On Herod’s birthday the daughter of Herodias danced for the guests and pleased Herod so much that he promised with an oath to give her whatever she asked. Prompted by her mother, she said, “Give me here on a platter the head of John the Baptist.” The king was distressed, but because of his oaths and his dinner guests, he ordered that her request be granted and had John beheaded in the prison. His head was brought in on a platter and given to the girl, who carried it to her mother. John’s disciples came and took his body and buried it. Then they went and told Jesus.

There are a lot of lessons to be learned from this story. Herod was the ruler of Galilee and Perea. He had a rather public affair with Herodias, his brother’s wife, which led John the Baptist to rebuke him. This made Herod want to kill John, but he was afraid of the people. Eventually, however, there seems to have been a strange relationship that developed between the two. Herod grudgingly began to respect John, and one suspects, that given some time John might have led him to repentance.

However, something happened that prevented this from taking place. Herod threw a grand party for his birthday and invited Salome, the daughter of Herodias, to dance for him. Herod was so pleased, he told her she could have anything she asked for, up to half of his kingdom. Crazy, ya? But men can do some pretty crazy things when it comes to women. Anyway, on advice from her mother, Salome asks for the head of John the Baptist on a platter. And Herod, more mindful of his guests than he is mindful of God, agrees and tells his men to chop off the prophets head. Ouch!

I am sure we will all agree that was a terrible thing to do, which made Herod a terrible person. I am sure we think Herodius was pretty terrible too. The same goes for any other villain in the Bible. Anybody think highly of Judas? I’m guessing not. Now, here’s the thing: I don’t know if we realize how often we are like the villains we despise. Don’t we, too, often care more about what the world thinks of us rather than what God thinks? Don’t we, too, often do what is wrong despite knowing what is right? Don’t we, too, refuse to stand by our friends if it means we will be ridiculed? Don’t we, too, often sell out our Lord, sometimes for less than thirty pieces of silver?

So, what is the point of asking these questions? Well, it’s simply really. See, we don’t like these villains because of the villainous things they do. If we do villainous things, then we become villains too. And, as we have established, nobody likes villains. Better to be a hero, no? But then heroes get their heads chopped off, you will say. True, but would you rather be remembered as John the Baptist, with a chopped off head, or as Herod, who chopped off heads? It is a serious question, especially because there is a natural tendency to take the path of least resistance.

The world needs heroes today, real ones, not guys who prance about in fancy dress. God is looking for heroes as well, people who will follow in the footsteps of John the Baptist, and the apostles who came after him. They led austere and holy lives, not compromising on their beliefs, no matter the personal cost. These people were all world changers. And we need to be as well. With everything in a state of flux, we can determine and direct the way the world moves forward from here.

Let us not waste this opportunity. We may very well be the last heroes of the last age.