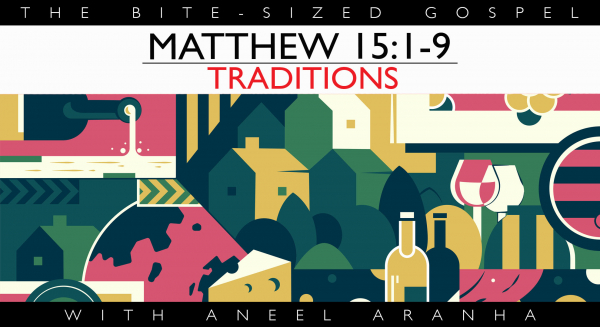 Then some Pharisees and teachers of the law came to Jesus from Jerusalem and asked, “Why do your disciples break the tradition of the elders? They don’t wash their hands before they eat!” Jesus replied, “And why do you break the command of God for the sake of your tradition? For God said, ‘Honor your father and mother’ and ‘Anyone who curses their father or mother is to be put to death.’ But you say that if anyone declares that what might have been used to help their father or mother is ‘devoted to God,’ they are not to ‘honor their father or mother’ with it. Thus you nullify the word of God for the sake of your tradition. You hypocrites! Isaiah was right when he prophesied about you: “‘These people honor me with their lips, but their hearts are far from me. They worship me in vain; their teachings are merely human rules. ’ ”

When I was a boy I watched a lovely movie called "Fiddler on the Roof" starring Topol as Tevye. Tevye was a poor Jewish milkman living in a small Ukrainian village with his rather large family. He, like everybody else in his village, was hooked to traditions handed down by their ancestors for ages.

In one wonderful segment Tevye explains one of the traditions: "For instance, we always keep our heads covered and always wear a little prayer shawl. This shows our constant devotion to God." Then he adds: "You may ask: How did this tradition get started? I'll tell you: I don't know."

About the time I watched Fiddler on the Roof (about 35 years ago), I used to be told by my mother not to cut my nails in the night or snakes would come into the house. Have you heard something like that? If you are over a certain age, I'm sure you have heard this, or a variation of this.

Why would she say something like that? Because in my grandmother's time they didn't have nail clippers and they didn't have electricity. They had to cut their nails using razor blades! Now if they tried cutting their nails in the dark, there was a good chance they'd cut off a finger instead of a nail. So, she frightened my other with the threat of snakes. And my mother tried to frighten me! So, you see!

However, these traditions don’t jeopardise our eternal salvation. Others, where we honour God with our lips although our hearts are very far from him, or teach people to worship God based on human rules rather than in Spirit and in truth, can have eternal ramifications. So, let’s be careful about how we practice our faith.

These reflections are a great way of discovering why we do what we do so stay tuned! And, yeah, watch Fiddler on the Roof! You'll love it!