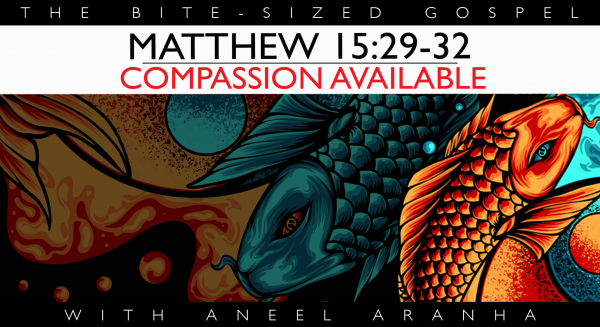 Jesus left there and went along the Sea of Galilee. Then he went up on a mountainside and sat down. Great crowds came to him, bringing the lame, the blind, the crippled, the mute and many others, and laid them at his feet; and he healed them. The people were amazed when they saw the mute speaking, the crippled made well, the lame walking and the blind seeing. And they praised the God of Israel. Jesus called his disciples to him and said, “I have compassion for these people; they have already been with me three days and have nothing to eat. I do not want to send them away hungry, or they may collapse on the way.”

I know that every now and then, especially in the midst of great struggles, we feel that God doesn’t care. If you are feeling like that now (or might feel like that in the future), take note of today’s passage. Jesus cares. After preaching to thousands of people who had gathered to listen to him, Jesus called his disciples to him and said, “I have compassion for the crowd, because they have been with me now for three days and have nothing to eat; and I do not want to send them away hungry.”

So, the automatic question that often follows is this: if Jesus is truly compassionate, and cares so much about us, why does he leave us to suffer? The answer is also contained in this passage, first in the response of the crowds, then in the response of the apostles. The crowds went to him, seeking help, placing themselves at his feet! We need to go to Jesus too, confessing our helplessness before the overwhelming odds against us.

Jesus did what he wanted, then turning to the apostles, got them involved in what he wanted to do. “Let’s feed them,” he said. “How? There isn’t enough bread in the desert to feed so many,” they said, admitting their own helplessness. “How many loaves do you have?”, Jesus asked. “Seven and a half,” they replied, admitting their own insufficiency. Jesus nodded, blessed what they had, and told them to distribute it. They did, and through their obedience, fed the multitudes.

What do we learn from this? In ourselves, we are helpless to do anything. By ourselves, we have very little we can offer. But when we go to Jesus, admitting to our helplessness and placing ourselves under his control and care, he can make the impossible possible. Scripture affirms this, although in a different context: “What is impossible with man is possible with God” (Luke 18:27).

So, let us not despair when things get difficult. And when Jesus asks us to be part of his mission, let us not hesitate to say yes.