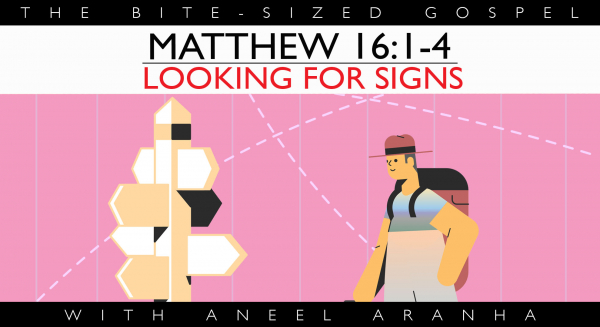 The Pharisees and Sadducees came to Jesus and tested him by asking him to show them a sign from heaven. He replied, “When evening comes, you say, ‘It will be fair weather, for the sky is red,’ and in the morning, ‘Today it will be stormy, for the sky is red and overcast.’ You know how to interpret the appearance of the sky, but you cannot interpret the signs of the times. A wicked and adulterous generation looks for a sign, but none will be given it except the sign of Jonah.” Jesus then left them and went away.

Besides, Jesus had already given them signs. If his awesome preaching was not enough, his miraculous multiplication of a few fish and loaves to feed thousands should have. But, they weren't looking to believe; they were looking to condemn, and no matter what Jesus did, nothing would have changed their minds about him. This is what being hard-hearted is. So many of us are the same way.

Our God is a God who reveals himself when sought. I often tell people who are confused about the existence of God or unsure about which one he is in a pantheon of gods to tell him to show himself because I know he does. Not only have I seen the truth of this in my life, but I have also seen thousands of people experience him when they open their hearts to the truth of his reality. The key to this is truly seeking him with an open heart.

But if we are open-minded (this is the scientific way, right, to be open-minded?) and open-hearted, let’s go ahead and tell God to reveal himself. And ask him to tell us his name while he is at it. Scripture says, "Do not put the Lord your God to the test" (Deuteronomy 6:16), but this is doing what the Jews did: asking him to prove himself. When the apostle Thomas, who knew Jesus asked for a sign, Jesus let him put his hand into his side. Thomas immediately confessed, "My Lord and my God!"

All said I would like to leave you with the words of Jesus to Thomas in conclusion, "You have believed because you have seen me; blessed are those who have not seen and yet have believed." (John 20:29)