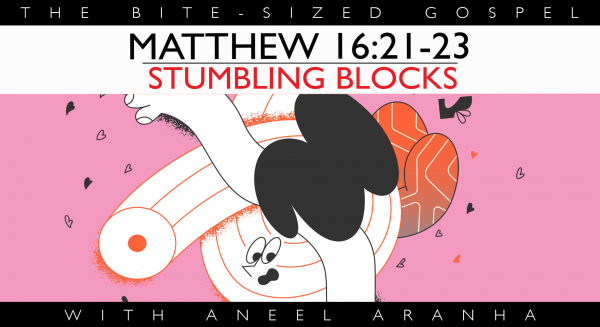 From that time on Jesus began to explain to his disciples that he must go to Jerusalem and suffer many things at the hands of the elders, the chief priests and the teachers of the law, and that he must be killed and on the third day be raised to life. Peter took him aside and began to rebuke him. “Never, Lord!” he said. “This shall never happen to you!” Jesus turned and said to Peter, “Get behind me, Satan! You are a stumbling block to me; you do not have in mind the concerns of God, but merely human concerns.”

Jesus can sometimes seem very harsh, can’t he? Consider, for instance, his words to Peter here. “Get behind me, Satan! You are a stumbling block to me; for you are setting your mind not on divine things but on human things.” Now, Jesus had just told his apostles that he was heading off to Jerusalem where he would suffer terribly and then be put to death. In response Peter did something any of us might have done: taken Jesus aside and tried to talk him out of it. “Think of how much more you will be able to accomplish alive than dead,” we might have told him. Yes? So, why did Jesus respond as he did?

Because, as Jesus said, we are thinking in a human way, not a divine way. And this “human thinking” can become a stumbling block for those who have chosen the “divine path”. Consider if Jesus had dwelt on what Peter was saying even for a moment. He might have been tempted to divert from his mission to save the world. So he was brutal in his response. As brutal as he was with the devil in the desert who was also trying to divert him from his path. He had to be. WE have to be as well. How often do we flirt with temptation? It’s like playing with fire. We are sure to get burnt. The only way to deal with fire is to douse it, the moment it starts!

This “worldly” way of thinking can be a stumbling block to us who are trying to lead a godly life. However, it isn’t always others — devil included — who are trying to get US to stumble. There are times WE make others stumble, trying to tempt them away from the godly path. And Jesus does not mince any words here either. “If anyone causes one of these little ones—those who believe in me—to stumble, it would be better for them to have a large millstone hung around their neck and to be drowned in the depths of the sea. Woe to the world because of the things that cause people to stumble! Such things must come, but woe to the person through whom they come!”

I saw a video last week about how little children are being deliberately targeted through apps and shows. Although these are supposedly designed for them, they are often loaded with content that is sexual in nature. Public schools in many countries are giving sex education to children who are not psychologically or physiologically ready for it. These courses are often for five or ten weeks! How much about sex does a child need to know? Woe to the world, indeed. And, then, there are the people who will mess with kids, warping their psyche along with their sexuality for the rest of their lives. They need to think about millstones wrapped around their necks!

Then, there is another type of stumbling block we can put before people. As Christians, we have some freedom in what we eat or drink. The Corinthians had reservations about eating meat sacrificed to idols. Paul said, “We know that an idol is nothing at all in the world, because there is no God but one” (see 1 Corinthians 8:4) and he had no problem with eating anything because he KNEW these truths. However, he cautioned: “Be careful, however, that the exercise of your rights does not become a stumbling block to the weak” (1 Corinthians 8:9). The Christian today needs to apply this discernment to issues like drinking, dancing, and dressing, so they do not cause somebody “unknowledgeable” to fall.

So, let us not be a stumbling block to anybody in their relationship with God, ok?