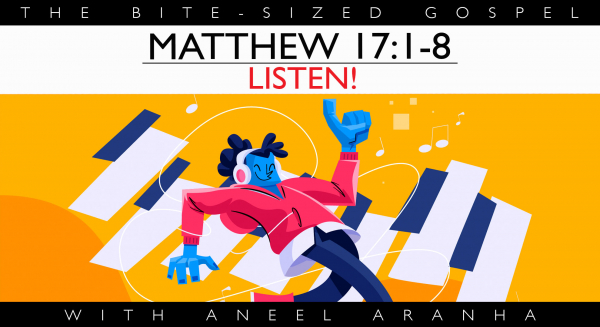 After six days Jesus took with him Peter, James and John the brother of James, and led them up a high mountain by themselves. There he was transfigured before them. His face shone like the sun, and his clothes became as white as the light. Just then there appeared before them Moses and Elijah, talking with Jesus. Peter said to Jesus, “Lord, it is good for us to be here. If you wish, I will put up three shelters—one for you, one for Moses and one for Elijah.” While he was still speaking, a bright cloud covered them, and a voice from the cloud said, “This is my Son, whom I love; with him I am well pleased. Listen to him!” When the disciples heard this, they fell facedown to the ground, terrified. But Jesus came and touched them. “Get up,” he said. “Don’t be afraid.” When they looked up, they saw no one except Jesus.

Those who listen to these podcasts might have noticed that I begin reading every Scripture passage by saying: Listen! That’s because, as G. K. Chesterton said, “there’s a lot of difference between hearing and listening.” What’s the difference? Hearing is simply the act of receiving sounds by the ear. If we are not deaf, hearing simply happens. Listening, however, is something we consciously choose to do. It requires concentration so that our brain processes meaning from words and sentences.

Jesus would often preface his sentences by telling his audience to “Listen!” In today’s passage, we find God, the Father telling us to listen to Jesus. “This is my Son, the Beloved; listen to him.” And Jesus, himself, had at one point advised: “Consider carefully how you listen” (Luke 8:18), because listening is important. However, most of us are very poor listeners. Which is a pity, because we are not going to be able to listen to the things God says if we can’t listen to the things that people say.

It would help us immensely to remember that good listening is an act of love. If we keep this in mind, and make an effort to listen the next time our spouses or our children or our parents talk to us, instead of looking at the TV and grunting, “uh, uh”, it will make a huge difference to our relationship with them. Try it and see. Good listening is also an act of godly ministry. When a person sees that we are actually listening to what they are saying, they are tremendously comforted.

Good listening also helps us to learn. I remember reading a quote from somebody who became very rich and famous — unfortunately, I can’t recall who it was; let me know if you know — where the person said that the reason he didn’t speak too much was because when he spoke, he could only talk about what he knew. But when he listened to others talk he could learn something he didn’t know. I thought that was pretty profound, and I have noticed that most of the wise people I have met listen more than they talk.

But the most important listening we can do is to the things that Jesus says. One time, he said: “The words “I have spoken to you—they are full of the Spirit and life.” Let us listen to them.