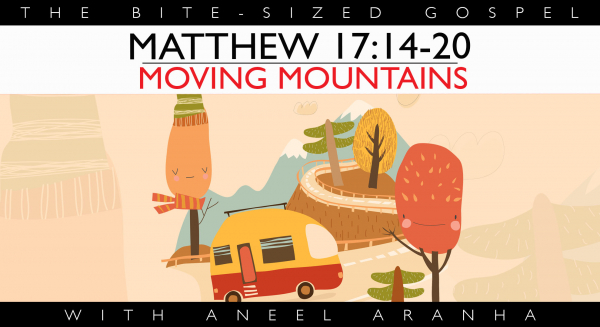 When they came to the crowd, a man approached Jesus and knelt before him. “Lord, have mercy on my son,” he said. “He has seizures and is suffering greatly. He often falls into the fire or into the water. I brought him to your disciples, but they could not heal him.” “You unbelieving and perverse generation,” Jesus replied, “how long shall I stay with you? How long shall I put up with you? Bring the boy here to me.” Jesus rebuked the demon, and it came out of the boy, and he was healed at that moment. Then the disciples came to Jesus in private and asked, “Why couldn’t we drive it out?” He replied, “Because you have so little faith. Truly I tell you, if you have faith as small as a mustard seed, you can say to this mountain, ‘Move from here to there,’ and it will move. Nothing will be impossible for you.”

There is a man whose son is unwell, and although he shows symptoms of epilepsy, we know from what follows that he is actually afflicted by a demon. The father takes his son to the disciples, perhaps because Jesus couldn’t be found. Besides they, too, have been working miracles. But they could do nothing. Why? They didn’t fail because they didn’t know what to do. A little earlier, we find Jesus sending them to go “cure the sick, raise the dead, cleanse the lepers, cast out demons” (Matthew 10:8).

When they returned, they reported that they had done these things so dealing with demons was not something they were unfamiliar with. So again, why? Because they didn’t have faith? Oh, no, they had faith. The problem was that they didn’t have enough of it. When the demon put up resistance, they first became dismayed, then discouraged. Then doubt set in. A hostile audience began taunting them and instead of continuing to pray and cast the demon out, they entered into an unproductive debate.