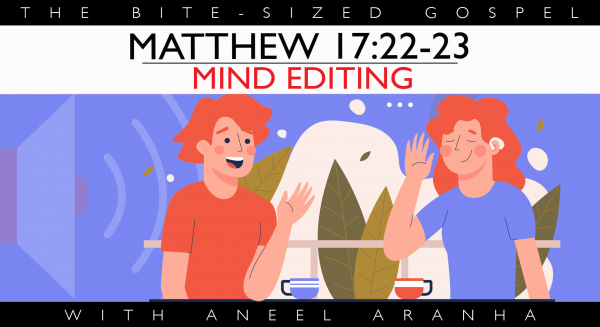 When they came together in Galilee, he said to them, “The Son of Man is going to be delivered into the hands of men. They will kill him, and on the third day he will be raised to life.” And the disciples were filled with grief.

The German composer Yohanne Wofgang von Goooete once said: A person hears only what they understand. We can see the truth of that in the short passage we are reflecting on today. Jesus had again told his disciples that he was going to be put to death, but then would be raised again. Scripture says they were filled with grief. It seems like they heard only the part about him dying, not the part about him being raised to life. Could they actually have not heard him?

They undoubtedly heard what Jesus had said, but because they could not process the information — how can one possibly rise from the dead? — their minds discarded it. This is perhaps the reason why, when Jesus’ body was discovered missing from the tomb, they did not realize that he had risen!

This “mind editing” happens with us too. When we hear some of the things that Jesus says or does, our brains don’t register them because it discards them as very strange, or impossible. For instance, when we read or hear the story about the manner in which Jesus healed a deaf and dumb man in Sidon most people don’t register the weird way Jesus healed them until it is pointed out to them. Read the story in Mark 7 to see what I am talking about.

For another example, at the end of the gospel of Mark Jesus sends his apostles out with the commission to preach the gospel to all creation, adding: “These signs will accompany those who believe: In my name they will drive out demons; they will speak in new tongues; they will pick up snakes with their hands; and when they drink deadly poison, it will not hurt them at all; they will place their hands on sick people, and they will get well” (Mark 16:17-18).

Every single one of us has heard or read this passage at least a few times, yet how many of us realize this passage speaks about the things that we, as believers, will do.

We lose a lot of the things that God says because of the automatic edits our minds do. If we don’t want to let this happen, we should enter into meditative mode whenever we read Scripture, taking our time to read each passage carefully, and then asking questions as we read them. For example: why did Jesus heal the deaf and dumb man in the manner that he did? And what did he mean when he said that believers would pick up snakes in their hands? The answers will give you great faith as you obtain much understanding.