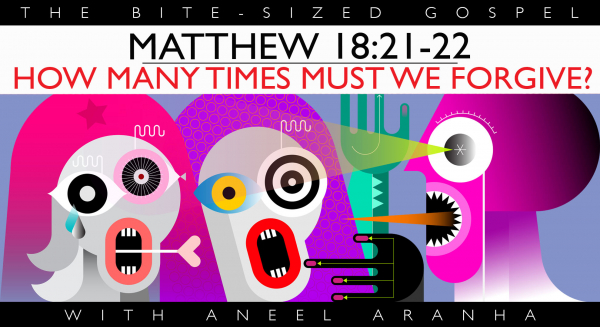 Then Peter came to Jesus and asked, “Lord, how many times shall I forgive my brother or sister who sins against me? Up to seven times?” Jesus answered, “I tell you, not seven times, but seventy-seven times.

One day Peter goes to Jesus and asks him how many times he should forgive someone who sins against him? In older translations, before there was gender inclusive language, Peter asks how many times he should forgive his brother, and one wonders if this may not have been a question specifically directed at his real brother Andrew. After all, nobody hurts us as much as those who are close to us! In any event, he continues asking another question: As many as seven times?

Peter thought he was being magnanimous. Not without reason, I might add, because the traditional teaching was that you needed to forgive someone three times at most. The fourth time you could cry havoc and let slip the dogs of war. The rabbis used Scripture to validate this teaching by misinterpreting Amos. “This is what the Lord says, “For three sins of Damascus, even for four, I will not relent.” “For three sins of Gaza, even for four, I will not relent.” And it goes on.

So Peter decides to double the number and add on one more for good measure. I imagine Jesus laughing. “No, not seven times, Peter. Seventy seven times.” And then he told Peter this story in today’s gospel, and I am not sure how much this impressed him, but I know for sure that another story did. It took place soon after the Last Supper, when Jesus went to Peter and said to him, “Simon, Simon, Satan has asked to sift all of you as wheat. But I have prayed for you, Simon, that your faith may not fail. And when you have turned back, strengthen your brothers.”

Tough guy that he was Peter told Jesus he was ready to follow him to prison and even death. And Jesus said, “Oh I tell you before the cock crows you would have denied me three times.” And we know that’s exactly what happened. Jesus was arrested and beaten and watching what happened to him, Peter’s courage failed him. He tried to hide himself, but people recognized him. He denied Jesus just as he had predicted and then the cock crowed. Scripture has these poignant words: Then the Lord turned and looked straight at Peter (Luke 22:61).

I can’t even imagine what Peter felt like at that moment, but what he saw in Jesus’ eyes was not condemnation, or anger, or disappointment. It was only love. And Peter went out and wept, grateful for a forgiving God. And I believe that’s when he learned to forgive. And it is something we need to learn to do just like everything else. We can’t learn to forgive unless we have realized that we are forgiven.

And far more than seventy-seven times.