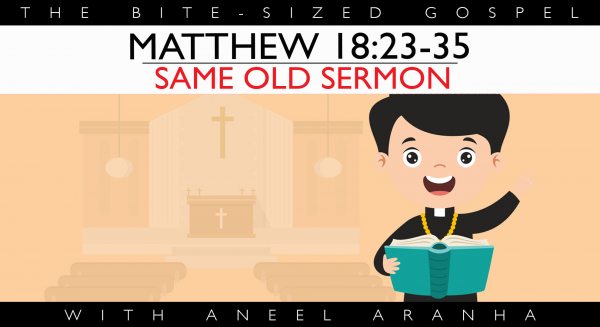 [Jesus said:] “Therefore, the kingdom of heaven is like a king who wanted to settle accounts with his servants. As he began the settlement, a man who owed him ten thousand bags of gold was brought to him. Since he was not able to pay, the master ordered that he and his wife and his children and all that he had be sold to repay the debt. “At this the servant fell on his knees before him. ‘Be patient with me,’ he begged, ‘and I will pay back everything.’ The servant’s master took pity on him, canceled the debt and let him go. “But when that servant went out, he found one of his fellow servants who owed him a hundred silver coins. He grabbed him and began to choke him. ‘Pay back what you owe me!’ he demanded. “His fellow servant fell to his knees and begged him, ‘Be patient with me, and I will pay it back.’ “But he refused. Instead, he went off and had the man thrown into prison until he could pay the debt. When the other servants saw what had happened, they were outraged and went and told their master everything that had happened. “Then the master called the servant in. ‘You wicked servant,’ he said, ‘I canceled all that debt of yours because you begged me to. Shouldn’t you have had mercy on your fellow servant just as I had on you?’ In anger his master handed him over to the jailers to be tortured, until he should pay back all he owed. “This is how my heavenly Father will treat each of you unless you forgive your brother or sister from your heart.”

Let me tell you a parable of my own today. It isn’t original but it’s a really good one. There was a pastor who was assigned to a new church, and on Sunday morning the congregation eagerly waited to hear him. To their delight he gave them a very powerful homily on the wages of sin. It was unlike any they had heard before and they eagerly looked forward to listening to him preach the following Sunday. To their disappointment, he preached the same homily. They figured it may have been for the benefit of those who hadn’t heard him the previous week.

However, the next Sunday he did the very same thing. It was more than they could take. They formed a committee (of course!) and went to him. “What can I do for you brothers?”, he asked them. They said, “We are a bit concerned that you keep preaching the same old sermon every Sunday. Our question is: Do you have another sermon?” The pastor looked at them, smiled softly, and responded, “I do have another sermon. But you haven’t obeyed the first one yet.” <smiles> Do you know why I told you this story? Of course you do.

Have they taken you to a courtyard, stripped you naked, and then flogged you until the flesh tore from your body? Then, did they take you to a dungeon and hammered a crown of thorns on your head until blood covered your face? Then, did they take you to the gates of the city and gave you a cross to carry up a hill while all around you people mocked you, spat at you, hurled abuse at you? And then, when you reached the top of that hill, did they crucify you on the cross you carried and leave you in the hot afternoon sun to die? Tell me, what has anybody done to you that is so bad that you cannot forgive them?

I am not making light of your wounds. But, do remember that God has forgiven us for wounding him. It is a debt far huger than anything anybody owes us. It cost his Son every drop of his blood to pay the price. He did so willingly because he loves us so much. He asks for only one thing in return. That we forgive others as he has forgiven us. If we cannot do this, we effectively reject our adoption as God’s children, and declare our preference to be children of the devil. Well, there is only torture we receive at the devil’s hands — as we only know too well. That surely cannot be what we want, no?

So let us forgive those who have hurt us and live in the abundance of life that Christ promises we will. And, maybe, we will not have to hear the same old sermon again. :)