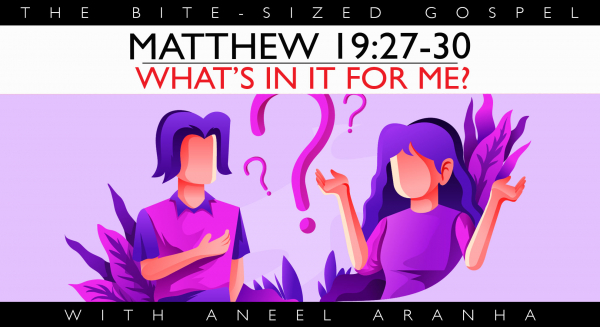 [Peter said to Jesus:] “We have left everything to follow you! What then will there be for us?” Jesus said to them, “Truly I tell you, at the renewal of all things, when the Son of Man sits on his glorious throne, you who have followed me will also sit on twelve thrones, judging the twelve tribes of Israel. And everyone who has left houses or brothers or sisters or father or mother or wife or children or fields for my sake will receive a hundred times as much and will inherit eternal life. But many who are first will be last, and many who are last will be first.

When the rich young man went away because Jesus told him to sell his possessions and give the money to the poor and then come follow him, Peter asked — of course, it had to be Peter — “Lord, we have left everything and followed you. What’s in it for us?”

From the question, one might think they had given up more than a few boats and nets, but Jesus must have felt charitable because he didn’t rebuke the apostles. Besides, to their credit, they hadn’t asked the question BEFORE they gave up everything to follow Jesus. Also, although what they gave up was little, it was a lot to them. They would have been delighted with Jesus’ reply. “Truly I tell you,” he said, “when the Son of Man is seated on the throne of his glory, you who have followed me will also sit on twelve thrones, judging the twelve tribes of Israel” (Matthew 19:28).

These words have greater significance than we might realize. First, Jesus says the apostles will be rewarded because they followed him, not because they gave up their nets and reeds. It is not in the “giving up” that salvation is to be found but in the “following” of Jesus. In this context, following Jesus doesn’t mean walking one step behind him; it means using him as a model for living. This is something that we should take note of. If we are followers of Christ, we must follow in his ways.

Second, Jesus says the twelve would sit on thrones and judge the tribes of Israel. The scribes and the Pharisees would surely say on Judgement Day: “Oh, we’re so sorry we failed to recognize that you were the Son of God, but what could we do? We were only human.” And the apostles would say, “And we, what were we? We also were human, no? You guys were priests and teachers and you should have known better.” And there is another powerful lesson in this for us. If we deny Christ, what excuse are we going to make? There might be other people sitting on other thrones judging us.

“And what’s in it for us?” you might ask. Well, there is a reward waiting for all of us who follow Christ to the exclusion of everything else. “And everyone who has left houses or brothers or sisters or father or mother or children or fields, for my name’s sake, will receive a hundredfold, and will inherit eternal life” (Matthew 19:30). This doesn’t mean that we are going to get a hundred fathers and mothers and children and fields when we get to heaven, but that what we give up will like nothing in comparison to what we will get.

Anybody interested? Oh, I almost forgot. What we get is for eternity.