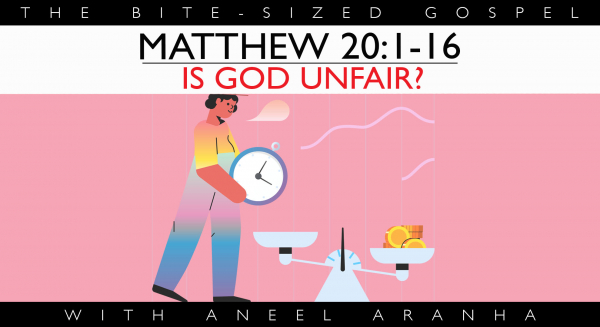 “For the kingdom of heaven is like a landowner who went out early in the morning to hire workers for his vineyard. He agreed to pay them a denarius for the day and sent them into his vineyard. “About nine in the morning he went out and saw others standing in the marketplace doing nothing. He told them, ‘You also go and work in my vineyard, and I will pay you whatever is right.’ So they went. “He went out again about noon and about three in the afternoon and did the same thing. About five in the afternoon he went out and found still others standing around. He asked them, ‘Why have you been standing here all day long doing nothing?’ “‘Because no one has hired us,’ they answered. “He said to them, ‘You also go and work in my vineyard.’ “When evening came, the owner of the vineyard said to his foreman, ‘Call the workers and pay them their wages, beginning with the last ones hired and going on to the first.’ “The workers who were hired about five in the afternoon came and each received a denarius. So when those came who were hired first, they expected to receive more. But each one of them also received a denarius. When they received it, they began to grumble against the landowner. ‘These who were hired last worked only one hour,’ they said, ‘and you have made them equal to us who have borne the burden of the work and the heat of the day.’ “But he answered one of them, ‘I am not being unfair to you, friend. Didn’t you agree to work for a denarius? Take your pay and go. I want to give the one who was hired last the same as I gave you. Don’t I have the right to do what I want with my own money? Or are you envious because I am generous?’ “So the last will be first, and the first will be last.”

How is this fair? A man comes in at the last moment, does an hour's work, and gets paid exactly the same as the guy who has spent all day working in the field? How is this fair? Don't you think? So, if this is what Jesus says the kingdom of heaven is, then it must mean God is not fair, right? Ah, well, this is Jesus at his annoying best, confusing everybody and turning everything upside down so that we can get it right.

So, how do we get it right? By looking at it right. See, this is not a story about fairness. This is a story about many other things. It's a story about generosity. The owner could have given each subsequent man he hired lower wages because they worked for a lesser time, but he showed his generosity by giving them the same wage. Do you see?

It is also a story about graciousness. These were people in need. They were hanging about the marketplace, looking for work so they could get enough money to provide for their families for the day. That's what a daily wage is. Anything less than that, and one or two stomachs might have to go hungry. The landowner realized that and acted accordingly. Do you see?

And it is a story about grudgingness. (Yes, that's a word, I checked). It's about being resentful of what others get. The workers who came in didn't complain that they were cheated. They knew that they weren't. They were paid exactly what they had agreed. They complained that the landowner made the others equal to them. Do you see?

Let's not be like that. Let us want everyone to be blessed, including our enemies.