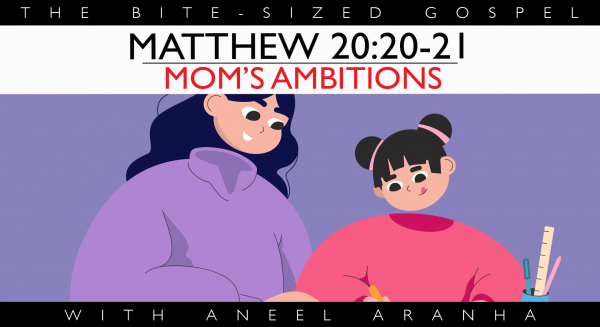 Then the mother of Zebedee’s sons came to Jesus with her sons and, kneeling down, asked a favor of him. “What is it you want?” he asked. She said, “Grant that one of these two sons of mine may sit at your right and the other at your left in your kingdom.”

I had a young girl come to me for counsel once, and she told me she felt fatigued by trying to please her parents, who had different goals for her. The pressure, especially from her mother, was too much, and it was driving her crazy. I suspect many of us can empathize because many parents try to fulfill their unfulfilled ambitions through their children, which can become unbearable.

In our story today, the mother of James and John, traditionally identified as Salome (see Matthew 27:56; Mark 15:40; Mark 16:1), goes to Jesus with an audacious request: “Declare that these two sons of mine will sit, one at your right hand and one at your left, in your kingdom,” she asks (Matthew 20:21). She had ambitions for her two sons.

Being ambitious is not always a bad thing. It becomes bad when it is selfish and motivated by a desire for power and prominence. And it becomes worse when it involves a parent because it forces a child to become competitive, often to an unhealthy degree. But you know that already, don’t you?

But, you might say, as a mother, shouldn’t I push my children? Yes, but the right way. And what is the right way? Let me tell you a parable. There was a young Italian boy who wanted to become a singer. When his mother took him to a music teacher for lessons, she was told her son had a “voice like a wind blowing through loose shutters.” Undaunted, the boy didn’t give up his dreams, and his mother didn’t dissuade him either. She prayed for him.

In November 1903, the boy, now a young man, stepped onto the stage of the Metropolitan Opera in New York City and began to sing. The reviews called him “the voice of the century.” The young man, whose name was Enrico Caruso, became known as “The Great Caruso.” Neither mother nor son had prayed for this title; they had prayed for a disciplined and committed life and for God’s will to be done in his life.

Let us ask for God’s will to be done in the lives of our children — not our own — and they will be blessed.