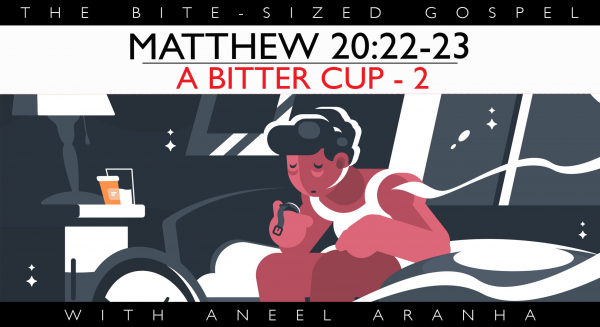 “You don’t know what you are asking,” Jesus said to the apostles. “Can you drink the cup I am going to drink?” “We can,” they answered. Jesus said to them, “You will indeed drink from my cup, but to sit at my right or left is not for me to grant. These places belong to those for whom they have been prepared by my Father.”

There are many famous Christian evangelists these days who preach a prosperity gospel. They say that the Christian life is a bed of roses, and we do not need to suffer because Christ has paid the price for all time, so we can all enjoy great success and prosperity. I don’t know what gospel they preach because it isn’t the one that Christ preached.

Consider today’s story. The mother of James and John goes to Jesus with a rather cheeky request that her sons sit on either side of Jesus in his kingdom. In Mark’s version, it is the apostles themselves who go to Jesus, but it doesn’t matter because they are here with their mother. Jesus ignores the mother and addresses himself to the apostles because he knows where the request comes from. “You aren’t thinking straight, he says before asking: “Are you willing to drink the cup I am about to drink?”

The cup isn’t a cup of wine; it’s a cup of suffering. In the Garden of Gethsemane, just before his Passion, Jesus cries out in agony, “Father, if you are willing, remove this cup from me,” before adding, “yet, not my will but yours be done” (Luke 22:42). Both the apostles said they were willing to drink the cup, and they did. James was the first of the apostles to be martyred for Christ. John was the only one who wasn’t, but he had a tough life, ending up in exile on the island of Patmos.

So, you see, suffering is part of the package. We are all children of God, but there is a price for sonship. In his letter to the Romans, Paul writes: “The Spirit himself testifies with our spirit that we are God’s children. Now if we are children, then we are heirs —heirs of God and co-heirs with Christ, if indeed we share in his sufferings in order that we may also share in his glory” (Romans 8:16-17).

I know this isn’t a message we like to hear, which is why those prosperity preachers are so popular. But this is the gospel message. I don’t know where James and John will be sitting in Jesus’ kingdom, but I am pretty sure they will be in the throne room, very close to the King. As will a host of others who have embraced suffering for the love of their God. Like Paul and so many others who followed in their footsteps.

Now, for those of you who don’t know who to believe, the prosperity preachers or preachers like me, might I suggest you check out what Jesus says for yourself? They’re all right here in this book we call the Bible.