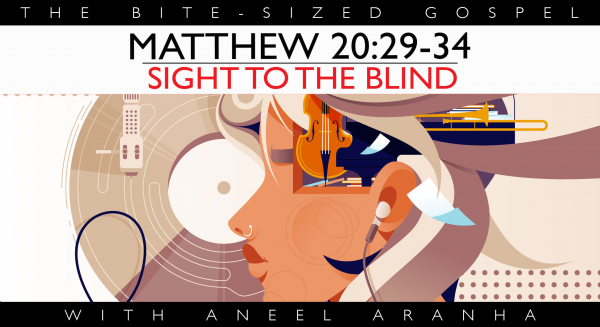 As Jesus and his disciples were leaving Jericho, a large crowd followed him. Two blind men were sitting by the roadside, and when they heard that Jesus was going by, they shouted, “Lord, Son of David, have mercy on us!” The crowd rebuked them and told them to be quiet, but they shouted all the louder, “Lord, Son of David, have mercy on us!” Jesus stopped and called them. “What do you want me to do for you?” he asked. “Lord,” they answered, “we want our sight.” Jesus had compassion on them and touched their eyes. Immediately they received their sight and followed him.

You undoubtedly know the story of Thomas, the apostle, who doubted Jesus had risen from the dead. He said he wanted to see the nail marks in Jesus’ hands and put his finger in Jesus’ side before he believed the story (see John 20:25). Jesus appeared to Thomas and allowed the apostle to clear his doubts, but then said: “You have believed because you have seen me; blessed are those who have not seen and yet have believed.” (John 20:29). The beggar in today’s story illustrates this truth. This beggar—Mark tells us his name is Bartimaeus (see Mark 10:46-52) — literally cannot see, but he believes and is blessed for it.

It is a story of tremendous faith that I wish all of us had, because as Scripture tells us: “Without faith it is impossible to please God, because anyone who comes to him must believe that he exists and that he rewards those who earnestly seek him” (Hebrews 11:6). Bartimaeus sought Jesus and was rewarded for it. He was also persistent in his seeking. Ignoring the people around him who kept telling him to shut up, he continued pleading—loudly—until Jesus took notice of him. Sometimes, we feel that Jesus doesn’t hear our cries, but he wants to see if we get discouraged and give up or continue seeking him.

Jesus always hears our cries and is ready to help us. There was a huge crowd following Jesus, and they were noisy, as crowds tend to be. Very often, we can’t hear ourselves think over the noise. But Jesus heard Bartimaeus and asked that the beggar be brought before him. He knew the man wanted to be healed, but, nonetheless, he asked the blind beggar: “What do you want me to do for you?” Why ask the obvious? Because there is power in the spoken word, and vocalizing something serves to energize faith. It also helps to identify what the person really wants.

People might try to stop us from going to Jesus, just like they did with Bartimaeus. Why do they do this? Paul said: “the god of this age has blinded the minds of unbelievers so that they cannot see the light of the gospel that displays the glory of Christ, who is the image of God” (2 Corinthians 4:4). These unbelievers are also blind, but spiritually. Bad enough, they don’t seek the light. They try to prevent others from seeking it too. Let us not let them intimidate or put us off because great — and eternal — is the reward for those who find Jesus.

Let us seek Jesus in faith. He wants to give us sight. And much else.