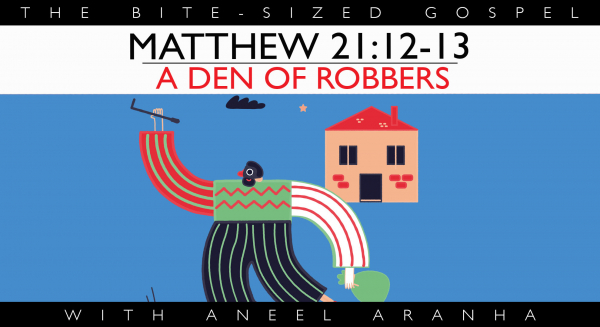 Jesus entered the temple courts and drove out all who were buying and selling there. He overturned the tables of the money changers and the benches of those selling doves. “It is written,” he said to them, “‘My house will be called a house of prayer,’ but you are making it ‘a den of robbers.’”

This episode might seem like Jesus is targeting commercial enterprise done in the name of religion, but it is more than that. Consider what Jesus said: My house shall be a house of prayer, but you have made it a den of thieves. These are two statements from the Old Testament.

The first statement about the temple being a house of prayer is from Isaiah 56:7, where God promises to bring all who seek him to salvation. This is what the verse says: "These I will bring to my holy mountain, and make them joyful in my house of prayer; their burnt offerings and their sacrifices will be accepted on my altar; for my house shall be called a house of prayer for all peoples."

Many churches today, and I speak universally, have lost a sense of prayer. To attract numbers - and money, they have turned churches into houses of entertainment, often televised to boost numbers further. Even in those churches, largely traditional, where shoddy theater produced by fourth-rate money merchants is not encouraged, worship seems to be more about the "act of worship" rather than communing with God, and those who pastor them act more like administrators than shepherds.

How do we rectify this? Jesus said, "God is spirit, and those who worship him must worship in spirit and truth." (John 4:24). Restore the sanctity of the temple by ceasing all activity that detracts from it and preach the truth as God intends it to be preached. In truth. Bare and bold. Sugar-coated, diluted, and corrupted messages don't serve anything except rob God of what belongs to him. Scripture says that Jesus went on to preach, and his words made the leaders want to kill him, but the people who heard him were changed.

A challenging message? But that's the way it should be.