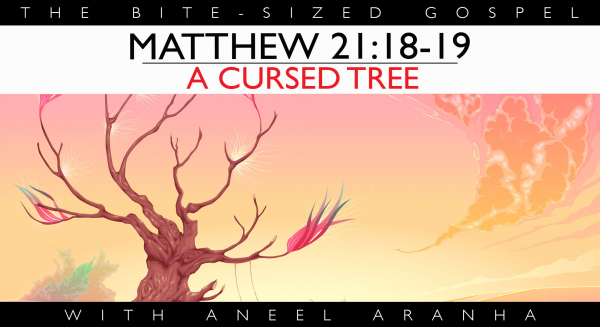 Early in the morning, as Jesus was on his way back to the city, he was hungry. Seeing a fig tree by the road, he went up to it but found nothing on it except leaves. Then he said to it, “May you never bear fruit again!” Immediately the tree withered.

Many of us find this episode of Jesus cursing a fig tree shocking, because it appears out of character. We are so used to picturing Jesus as a peaceful, even placid person, these incidents jar in our minds. An angry Jesus! Did Jesus get angry? Apparently so. But why curse a tree causing it to wither and die? Since this is Jesus we are talking about, there is obviously a deeper meaning to his actions, so let us discover it by following the progression of events.

Jesus had just entered Jerusalem in triumph. People laid their cloaks and branches on the road before him in welcome. Then Jesus entered the temple courts and overturned tables and benches and drove out all those who were buying and selling things there. I doubt he looked very placid at this moment; however, that didn’t stop people from coming to him for healing. As he healed people, children starting shouting, “Hosanna!”

To really understand what is happening here, imagine someone walking into your church and doing this! How would the pastors react? Welcome this crazy radical or be upset? Well, the pastors of *that* time — the chief priests and the teachers of the law — went ballistic and started plotting to kill him! How dare he!

The following morning, with the incident fresh in Jesus’ mind, Jesus makes his way back to the city. He is hungry. He spots a fig tree, lush with green leaves, and goes up to it but finds nothing except leaves. Annoyed, he says, “May you never bear fruit again!” And immediately the tree withered” (Matthew 21:18-20). Why? Because the tree gave every appearance of being fruitful by an abundant display of leaves! However, it was totally devoid of any fruit.

Jesus was making the point that our lives can be like that fig tree. We can give every appearance of being spiritual and devout by all the public displays of piety that we make. However, we don’t bear the fruit that show we are truly pious. The Pharisees were like that tree, making a great show of how religious they were, but as Jesus said, they were “like whitewashed tombs, beautiful to look at on the outside but on the inside were full of dead bones” (see Matthew 23:27). How do we fare in comparison? Something to think about today.