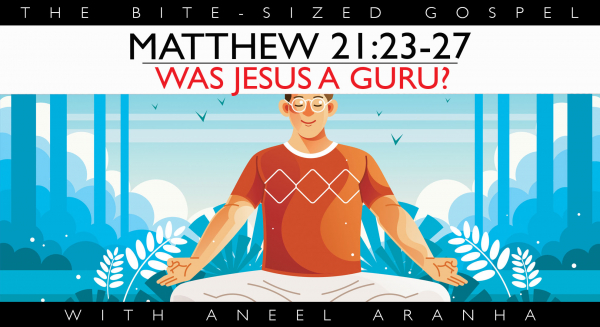 Jesus entered the temple courts, and, while he was teaching, the chief priests and the elders of the people came to him. “By what authority are you doing these things?” they asked. “And who gave you this authority?” Jesus replied, “I will also ask you one question. If you answer me, I will tell you by what authority I am doing these things. John’s baptism—where did it come from? Was it from heaven, or of human origin?” They discussed it among themselves and said, “If we say, ‘From heaven,’ he will ask, ‘Then why didn’t you believe him?’ But if we say, ‘Of human origin’—we are afraid of the people, for they all hold that John was a prophet.” So they answered Jesus, “We don’t know.” Then he said, “Neither will I tell you by what authority I am doing these things.

One day Jesus asked his disciples, “Who do people say that the Son of Man is?” And they said, “Some say John the Baptist, but others Elijah, and still others Jeremiah or one of the prophets.” He said to them, “But who do you say that I am?” Simon Peter answered, “You are the Messiah, the Son of the living God” (Matthew 16:13-16). Of all the questions Jesus asks, this is probably one of the most important because our answer to this question will determine how we respond to Jesus. These days, many people, including Christians, don’t look upon Jesus as the Son of God, preferring to call him a great teacher instead, a guru from which we could all learn some life lessons.

The famous author C. S. Lewis had a response to that: “You must make your choice: either this man was, and is, the Son of God, or else a madman or something worse. You can shut him up for a fool, you can spit at him and kill him as a demon, or you can fall at his feet and call him Lord and God. But let us not come with any patronizing nonsense about his being a great human teacher. He has not left that open to us. He did not intend to.” I don’t think anybody could have put it better!

Jesus made it clear to everybody that he was from God and that his purpose was to save the world from the effects of sin that had enslaved it. When he preached, the crowds were astounded at his teaching, for he taught them as one having authority and not as their scribes (Matthew 7:28-29). Now, what would you do if you were a scribe or a chief priest and discovered somebody preaching with more power and authority than you? Especially if you didn’t sanction him?

To make things worse, he was not a product of the religious schools like they were. So they went to Jesus and asked him, “By what authority are you doing these things, and who gave you this authority?” In typical style, Jesus countered their question with one of his own: “Did the baptism of John come from heaven, or was it of human origin?” When they couldn’t answer him, he went on his way. His authority came from God. If they couldn’t understand this, they wouldn’t understand anything.

So, who do you say Jesus is? Our actions will determine this more than our words!