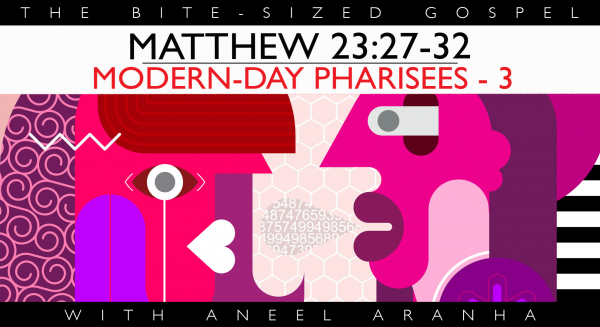 This is the third and final part of our reflection on the eight woes, the opposite of the eight beatitudes that Jesus spoke about in his Sermon on the Mount. Those who practice the Beatitudes are blessed; those who practice what he describes in this passage suffer. Since we would all like to be blessed rather than suffer, we might want to heed what he says.

One, we are contaminators of others. In the preceding verse, Jesus says, “Woe to you, because you clean the outside of the cup and the plate, but inside they are full of greed and self-indulgence.” In this one, he says, “Woe to you because you are like unwashed tombs, beautiful to look at on the outside, but inside full of dead bones and rotting filth.” The two might seem like variations of the same theme, but there is a marked difference. In the second one, he speaks about our effect on others.

Peter warns about such people. He says, “they will secretly introduce destructive heresies, even denying the sovereign Lord who bought them —bringing swift destruction on themselves. Many will follow their depraved conduct and will bring the way of truth into disrepute” (2 Peter 2:1-2). I see this happening increasingly around us, with people in leadership saying all kinds of heresies, but because what they say sounds so right, we buy into them. Let us be careful. And let us take care this doesn’t describe us.

Two, we are pretentious liars. When we look at some of the things people have done in the past, how many of us have said, “Oh, we never would have done that!” We do not realize that we are doing precisely that very often, but we don’t recognize it because the situations and circumstances are slightly different. Consider, for instance, the Pharisees that Jesus is blasting. Haven’t we said, “How terrible they were?”

I put all of this in a modern context to make us realize that we are similar to them, doing as they did very often. We cannot change unless we identify what we are doing wrong, turn to God in repentance, and ask for his grace to change us. If we stick close to him, the Holy Spirit will take care of the rest.

May we all be blessed. And may the Spirit be with you.